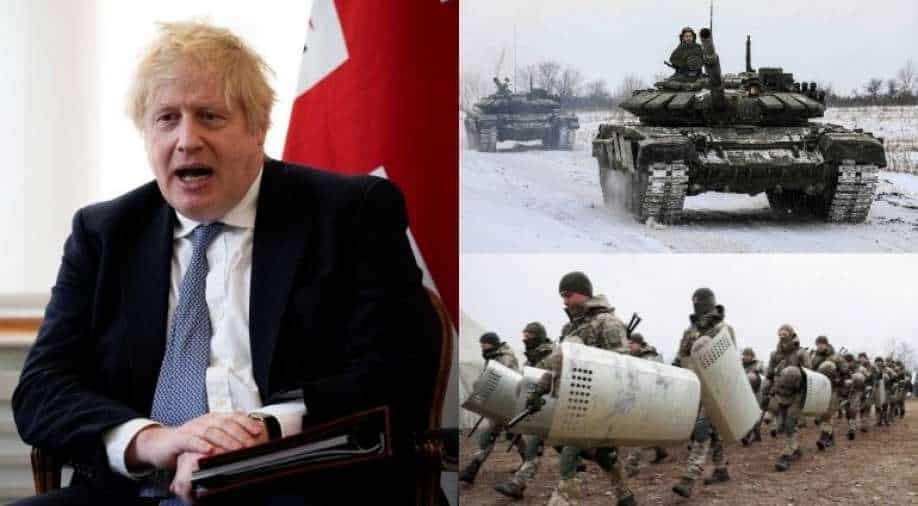 In this combination of images, British Prime Minister Boris Johnson can be seen along with Russian military tanks and Ukrainian soldiers Photograph:( Reuters )

British Prime Minister Boris Johnson has said that Russia is planning the biggest war since 1945.

"The fact is that all the signs are that the plan has already in some senses begun," he said in a BBC interview broadcast Sunday from the Munich Security Conference, after two Ukrainian soldiers were killed in attacks around rebel-held enclaves.

"People need to understand the sheer cost in human life that could entail," he said, after previously indicating that the West would continue to support any Ukraine resistance after an invasion.

"I'm afraid to say that the plan we are seeing is for something that could be really the biggest war in Europe since 1945, just in terms of sheer scale."

Hundreds of artillery shells exploded along the contact line between Ukrainian soldiers and Russia-backed separatists, and thousands of people evacuated eastern Ukraine, further increasing fears Sunday that the volatile region could spark a Russian invasion.

Western leaders warned that Russia was poised to attack its neighbor, which is surrounded on three sides by about 150,000 Russian soldiers, warplanes and equipment. Russia held nuclear drills Saturday in neighboring Belarus and has ongoing naval drills off the coast in the Black Sea.

The United States and many European countries have alleged for months that Russia is trying to create pretexts to invade. They have threatened massive, immediate sanctions if it does.

Ukrainian President Volodymyr Zelenskyy called on Russian President Vladimir Putin to choose a place to meet where the two leaders could meet to try to resolve the crisis.

Separatist leaders in eastern Ukraine on Saturday ordered a full military mobilisation and sent more civilians to Russia, which has issued about 700,000 passports to residents of the rebel-held territories.

Johnson has recommended that the West should cut off Russian companies' access to US dollars and British pounds if the Kremlin orders an invasion of Ukraine.

Given Russia's position as one of the world's top exporters of oil, gas and metals, which are largely priced and settled in US dollars, blocking Russian companies from access to dollar markets could have a stinging impact.

Putin has repeatedly called for reducing reliance on the US dollar trade.

Russia's largest oil company Rosneft fully switched the currency of its contracts to euros from US dollars to shield its transactions from US sanctions, CEO Igor Sechin said in 2019.