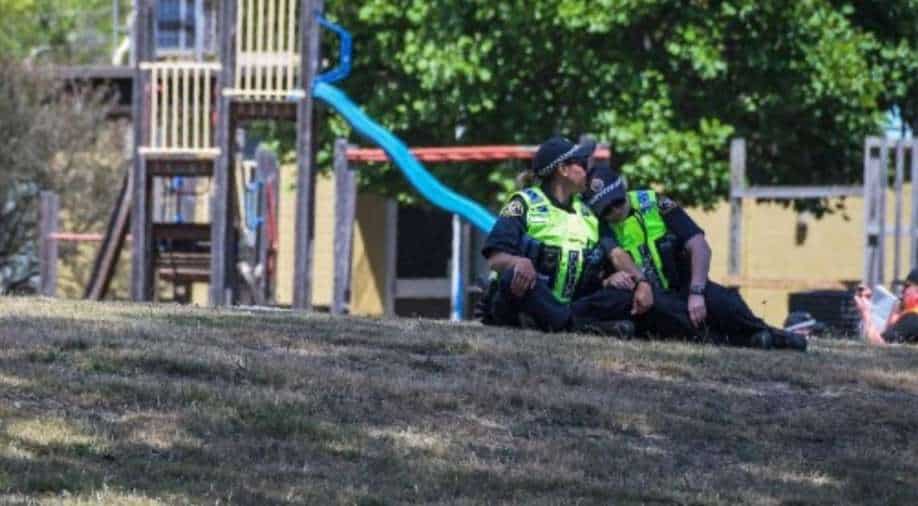 This photo taken and provided on December 17, 2021 by The Advocate/ACM shows members of the local police reacting near a playground outside the Hillcrest Primary School the day after five children died. Photograph:( AFP )

Tasmania police commissioner Darren Hine said, 'It is with a heavy heart that I can confirm an 11-year-old boy passed away in hospital this afternoon'

Police have informed that the death toll from Australia's bouncy castle tragedy increased to six after an 11-year-boy died in hospital on Sunday (December 19) over three days after the accident. Two other children remain in critical condition in hospital and one is recovering at home.

The accident happened on Thursday when children fell from a height of 10 metres after the bouncy castle was picked by the wind at Hillcrest Primary School in Devonport, northern Tasmania. The kids were celebrating an end-of-year party. They belonged to grade 5 and 6 and were about 10-12 years old.

Tasmania police commissioner Darren Hine said, "It is with a heavy heart that I can confirm an 11-year-old boy passed away in hospital this afternoon."

He added, "Our thoughts continue to be with his family, and the families and loved ones of all the children involved, during what is an incomprehensibly difficult time."

Previously, Australian Prime Minister Scott Morrison visited the memorial site and announced that the government would fund support to the families, first responders and community affected by the tragedy. Morrison and his wife paid their respects at the memorial and laid flowers.

"I want to extend our deepest sympathies to the five families in particular who have lost those precious young ones and we think also of the families of the three who are still in a terribly critical condition. We think of the entire community that is just heaving with sorrow," Morrison told reporters in Hobart.

The tragic incident led to an outpouring of grief in the local community and around Australia and an investigation was also launched to ascertain the cause.

After analysing the initial witness report, authorities have said that children were thrown from a height of about 10 metres (33 feet), however, they are waiting for the findings of the probe, which they expect will "take some time".

Also, specialist police are being flown to the island state to assist with interviewing people who were at the outdoor party, which some 40 primary school children attended.