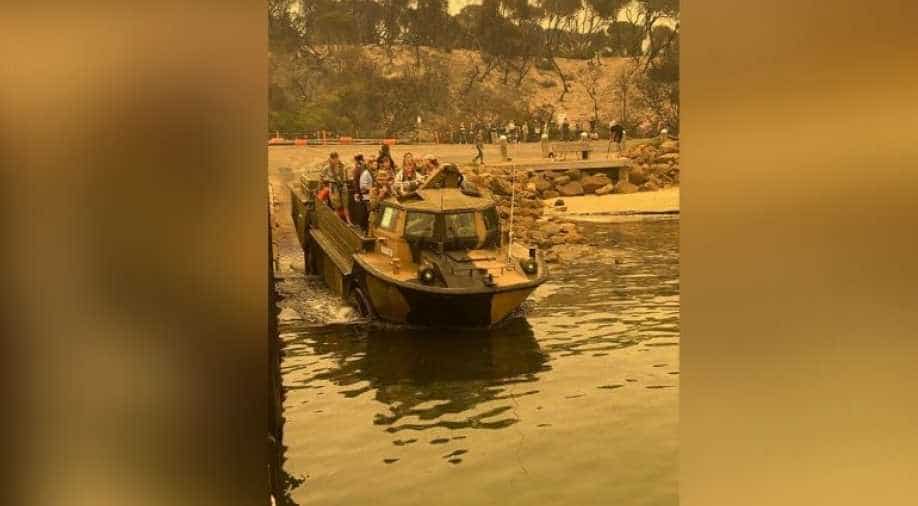 The Australian navy evacuated hundreds from the Victorian coastal town of Mallacoota, which has been cut off for days by wildfires.

Bushfires continued to rage in Australia on Friday showing no signs of abating leaving at least 18 people dead.

The authorities have declared a state of emergency in New South Wales with the wildfires raging even as Navy ships rescued hundreds of people from beaches in Australia.

The announcement comes after authorities ordered tourists from New South Wales south coast to Victoria's east Gippsland to leave the region within the next 24-hour period.

The navy evacuated hundreds from the Victorian coastal town of Mallacoota which has been cut off for days by wildfires, forcing as many as 4,000 residents and tourists to take shelter on beaches.

Over 200 fires have been burning around Australia, and warnings of extreme danger has now been set in motion in one of the largest evacuations in Australian history.

The latest spate of fires, which raced towards the coast this week has already destroyed over 200 homes.

As the situation in Australia worsened, the government deployed military ships and helicopters to rescue thousands trapped in the blazes.

Navy ships brought water, food and fuel to Mallacoota town where supplies have been mostly depleted and roads cut off by the fires.

Meanwhile, the authorities have urged a mass exodus from several towns on Australia’s southeast coast, an area that is hugely popular in the  holiday season with hundreds of  holidaymakers seeking shelter on beaches while many stood in shallow water to escape the flames.

A tourist leave zone has also been generated along the south coast by the New South Wales rural fire service under widespread power and communications outages.

The fires in Australia continue to be fanned by soaring temperatures and winds as columns of fire and smoke have engulfed several towns.