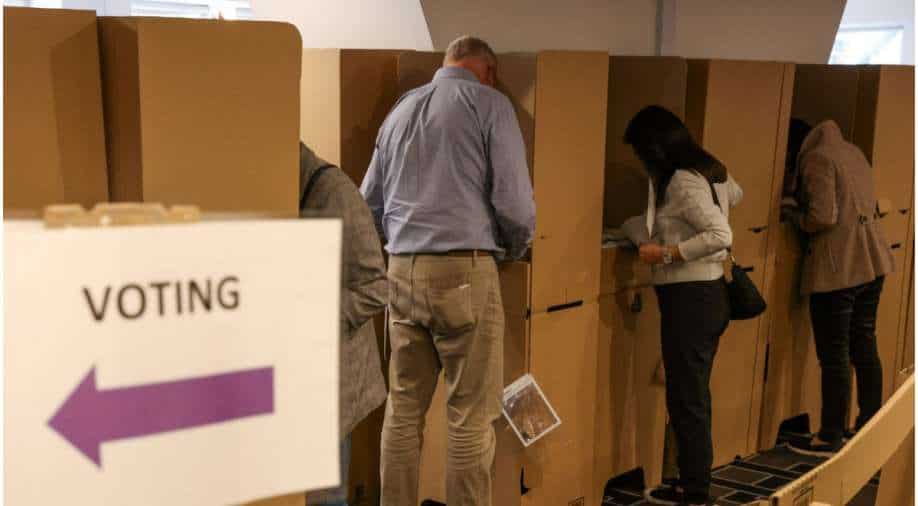 FILE PHOTO: Voters cast their ballots ahead of the national election at an Australian Electoral Commission early voting centre, in the Central Business District of Sydney, Australia, May 17, 2022. Photograph:( Reuters )

Will current Prime Minister Scott Morrison be able to retain his post or will the Labor Party leave the opposition benches after years?

Australians on Saturday (May 21) voted in the general elections. The mandate of the voter is sealed in the boxes across the country. Will current Prime Minister Scott Morrison be able to retain his post or will the Labor Party leave the opposition benches after years? Everything hangs in balance. While the officials count votes, let's take a look at the election process and Australian democratic institutions.

How many seats are up for grabs in the Australian general election?

Voting is compulsory for Australians. If a registered voter does not vote, he/ she has to pay A$20 as fine.

How many seats are needed to win elections in Australia?

76 out of 151 seats are required for a majority to form a government.

How was the tally last time?

In the last parliament, coalition of conservatives had 76 seats. The Labour had 68 with seven minor party and independent members.

There are 76 senate seats; 12 for each of the six states and two each for two territories. In the last parliament, the coalition held 36 seats and Labor 26, with a crossbench of 14.

There are 40 seats up for election: six from each state and the four territory seats.

Who becomes the prime minister?

The party which gains most seats, decides who would be the prime minister from its ranks

What are the issues and factors affecting the current election?

Challenges are ahead for the winner include inflation, which at two-decade highs and picking up pace, interest rates that have just started rising for the first time in more than 11 years, while pandemic spending portends massive budget deficits in the years ahead. Fortunately, unemployment is its lowest in almost 50 years

A cohort of climate-conscious independent candidates threatens some safe government seats, agitating for greater action after three years of fire, floods and pandemic. It is possible they could unseat some prominent government members and even hold the balance of power.

Pics | Australia election 2022: From top candidates to how it works, all you need to know

Foreign policy became an unlikely election issue after Prime Minister Scott Morrison sought to trumpet his national security credentials and claim Labor was not up to the job, only to be undercut by the Solomon Islands signing a security pact with China.

Morrison has promised a change in his style of governing, conceding he had been a "bit of a bulldozer", after his personality became an electoral liability.

Labor leader Anthony Albanese has offered an alternative based on his working-class roots and pragmatic style.