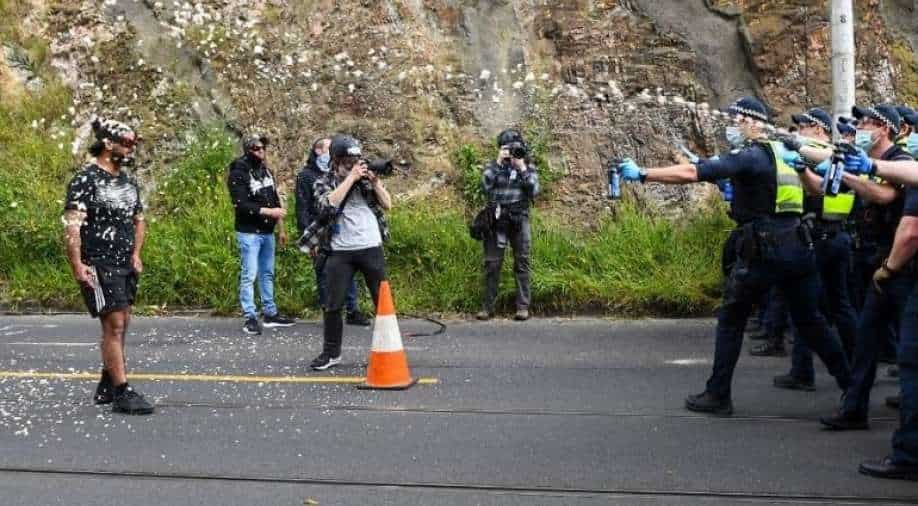 Police pepper spray a protester (L) during an anti-lockdown rally in Melbourne on September 18, 2021. Photograph:( AFP )

As the Australian government fights to control the surge in coronavirus cases, locals have taken to the streets to raise their voices against extended lockdowns.

Hundreds of locals gathered in the inner-city suburb of Richmond to avoid all pre-decided police checkpoints. People started raising slogans against the extended Covid lockdowns in the country.

However, what was predicted to be a peaceful rally turned into a violent clash between the anti-lockdown supporters and the local police officers.

A huge crowd gathered outside the town hall on Bridge Rd on Sunday. While they chanted their slogans against the government’s handling of the coronavirus pandemic, the local police started hushing them away.

Following the pepper spray attack, the demonstrators saw down in the middle of road.

As per initial local media reports, at least 200 arrests were made by local police officers for flouting Covid regulations, such as not wearing a mask and being too far away from their home.

"What we saw today was a group of protesters that came together, not to protest freedoms, but simply to take on and have a fight with the police," Victoria Police Commander Mark Galliott told media.

In addition to Melbourne, several small protests also sprouted in other parts of the country.

"It's all in the mix together," he said a day before the state is about to announce road map for reopening the economy. "The measures will be safe, they will be achievable and they will be in line with the National Cabinet plan."

"Every indication we've had from the people that do the epidemiological assessments is that case numbers will continue to rise," Foley added.