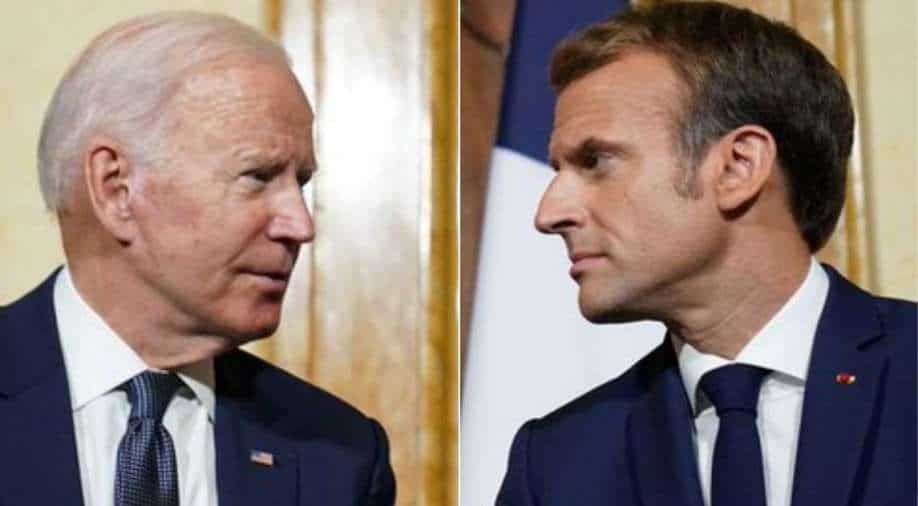 Biden called France an "extremely, extremely valued partner... and a power in itself" with the "same values" as the United States, admitting that what happened was a bit "clumsy"

President Joe Biden on Friday (October 29) said that the US was "clumsy" in securing a submarines deal, signed last month between the UK, US and Australia as part of the newly formed AUKUS grouping, that deprived France of billions of dollars for a similar contract.

During his closely-watched bilateral meeting with French counterpart Emmanuel Macron in Rome ahead of a G20 summit, Biden also said that "we have no older, or no more loyal or no more decent ally than France."

Last month, Australia pulled out of a multibillion-dollar submarines deal with France in favour of an alternative one with the United States and the United Kingdom that led to a diplomatic row.

It got escalated further as France had said that the deal was made without its knowledge and has jeopardised an existing contract. France had temporarily recalled its US ambassador also.

I had a great meeting with French President Emmanuel Macron this afternoon. The United States has no older, no more loyal, no more decent ally than France. They’ve been with us from the beginning — and we will always be there for them. pic.twitter.com/3hKzqDrkfQ

Now, Biden called France an "extremely, extremely valued partner... and a power in itself" with the "same values" as the United States, admitting that what happened was a bit "clumsy".

Biden said, ''I think what happened was, to use an English phrase, what we did was clumsy. It was not done with a lot of grace. I was under the impression that certain things had happened that hadn't happened and I want to make it clear France is an extremely, extremely valued partner..''

''I was under the impression that France had been informed long before that the deal was not going through, I honest to God did not know you had not been. But having said that, look there's too much we have done together, suffered together, celebrated together and value together," he added.

Macron said his meeting with President Joe Biden on Friday (October 29) would allow France and the United States rebuilt to rebuild trust following a rift over an Indo-Pacific security pact, and that it was key to look to the future.

The two leaders shared a warm handshake for the cameras after Biden kept Macron waiting for more than one and a half hours, before sitting down to talks over climate, counter-terrorism in West Africa and European defence.