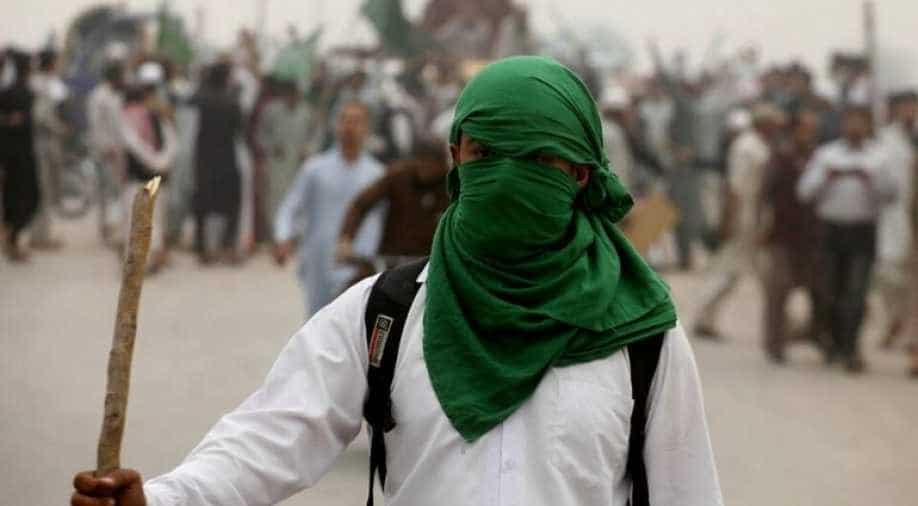 A supporter of the anti-blasphemy protests in Pakistan Photograph:( AFP )

Evidence is growing that humanist and atheist activists are being targeted on the basis of their rejection of a majority religion or their promotion of human rights, democratic values and critical thinking, it says.

Atheists and humanists are facing discrimination and persecution in some countries because of their beliefs and values, according to a new report.

Evidence is growing that humanist and atheist activists are being targeted on the basis of their rejection of a majority religion or their promotion of human rights, democratic values and critical thinking, it says.

Also read: Islamabad to get 1st Hindu temple, crematorium 73 years after the birth of Pak

Mubarak Bala, president of the Humanist Association of Nigeria, was last month arrested after being accused of blasphemy, which carries the death penalty. Bala, the son of a widely regarded Islamic scholar, has been an outspoken religious critic in a staunchly conservative region of the country.

“To speak out and say you’re an atheist or humanist in Nigeria can be dangerous, but Bala is very passionate about creating a space for those who do not subscribe to Islam or religion,” said Leo Igwe, a fellow Nigerian humanist and human rights advocate.

A range of tactics is used against humanists, atheists and non-religious people, says the report, which was funded by the UK Foreign and Commonwealth Office. They include the criminalisation of blasphemy and apostasy, impunity for attacks, social isolation and discrimination.

In Pakistan, the legal environment was “notably repressive; it has brutal blasphemy laws, systemic and legislative religious discrimination and often allows vigilante violence on religious grounds to occur with impunity”, according to the report.

One respondent said: “To be a humanist … [in Pakistan] you must have courage to lose everything.”

An issue of concern was “the practice of forced conversions in Pakistan. Girls and women from minority belief groups are often forced to marry into Muslim families,” the report says.

It cites the case of Fauzia Ilyas, founder of the Atheist and Agnostic Alliance Pakistan, whose ex-husband, a devout Muslim, was granted custody of their daughter “apparently on the basis of Fauzia having left Islam”. After a court in Lahore issued a warrant for Ilyas’s arrest in 2015, she fled to the Netherlands where she is seeking asylum.

Gary McLelland, the chief executive of Humanists International, said: “This report shines a light on the targeted violence, continued harassment and social discrimination faced by humanists in many countries and opens the door to conversations on how best to protect humanists worldwide. What is clear is that all laws and policies which criminalise ‘blasphemy’ should be repealed.”

The report is largely based on testimony from 76 people in the eight countries surveyed. One Malaysian respondent said: “Humanists and non-religious people are regularly attacked by zealous Muslims.” Another said people who expressed a lack of religious belief were “shunned and frowned upon”.