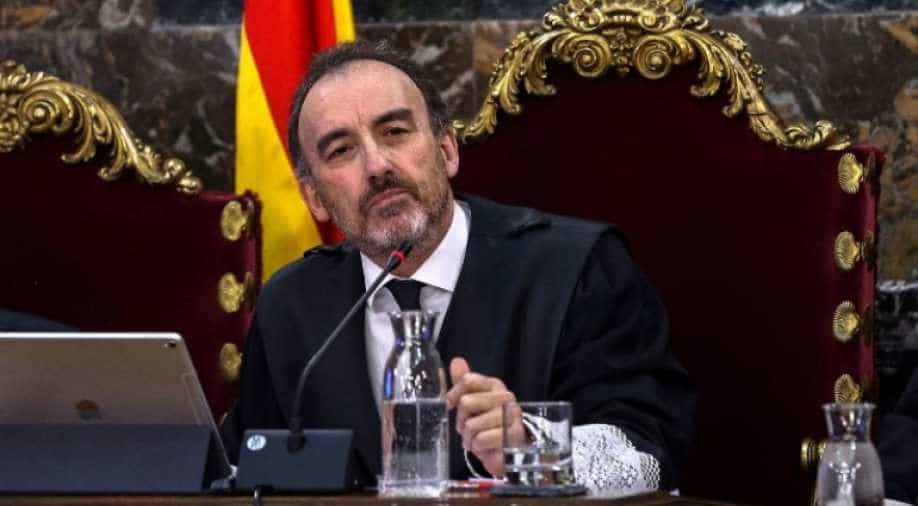 At the helm of the hugely divisive trial of Catalan separatist leaders, Supreme Court judge Manuel Marchena is performing a difficult balancing act, alternating firmness and leniency in live proceedings.

Seen as close to the conservative Popular Party (PP), which has taken a hard line against Catalan separatists, Marchena has trodden carefully in a trial he knows is under the domestic and foreign spotlight.

"At stake is his prestige, the prestige of the Supreme Court as well as the international image of Spain's judiciary," Xavier Vidal-Folch, deputy director of the El Pais daily, told Spanish radio on Wednesday.

He described Marchena as handling the proceedings "with great skill, with a little subtle irony and a lot of flexibility".

"Let's be serious," Marchena told one defence lawyer when refusing his demand to have Catalonia's former president Carles Puigdemont -- the main protagonist of a failed secession attempt in 2017 who fled Spain -- testify as a witness.

"You can't be a witness in the morning and a defendant in the afternoon."

But the 59-year-old judge, who has since 2014 presided over the criminal division of the Supreme Court, has also reprimanded prosecutors for some of their questions.

He also cut short the popular prosecution, a Spain-specific set-up that allows any citizen or organisation to be an accuser in court alongside public prosecutors -- in this case far-right party Vox.

Marchena warned the lawyer representing Vox that he would not allow "an ideological debate" in the courtroom.

An eye on Europe

The trial against 12 Catalan separatist leaders and activists, nine of whom are accused of rebellion, raised passions even before it started on February 12.

It is fiercely rejected by independence supporters in Catalonia but also fiercely supported by many Spaniards who watched aghast as Catalonia's executive tried to break from Spain in October 2017.

Such were the accusations of partiality levelled against Spain's judiciary that the proceedings are being broadcast live on television in an effort at transparency.

And Marchena has showed a degree of leniency towards the defendants.

When the popular prosecution asked him to tell one defendant to remove a yellow ribbon he was wearing that has come to symbolise the independence movement's cause, he overruled it.

On the first day of the trial, Marchena "gave time and absolute freedom to all sorts of arguments", legal or political, from the defence lawyers, says Celso Rodriguez Padron, spokesman for the conservative-leaning Magistrates' Professional Association.

To support some of his decisions, Marchena has referred to legal precedents set by the European Court of Human Rights, knowing the defendants will likely take the case to the European body, says Ignacio Gonzalez Vega, spokesman for the progressive Judges for Democracy professional association.

Even before the trial, Catalan independence supporters were wary of Marchena, who will be writing up the sentence at the end.

Some of those on trial tried in vain to recuse him, claiming he was impartial and had alleged links to the PP, in power at the time of the secession bid.

They cited as an example a leaked WhatsApp message by conservative senator Ignacio Cosido who in November welcomed the promotion of Marchena at the head of the Supreme Court.

Cosido said it would allow the conservatives to "control" the court "behind the scenes", raising doubts over Marchena's independence.

After the controversy this generated, Marchena gave up the promotion and remained at the head of the criminal division of the Supreme Court.

But his supporters point to his track record as a prosecutor before he was named Supreme Court judge in 2007, and since then.

He "is a very well qualified magistrate, and there is no doubt over his independence," says Julio Perez Gil, a professor of procedural law at the University of Burgos who knows him personally.