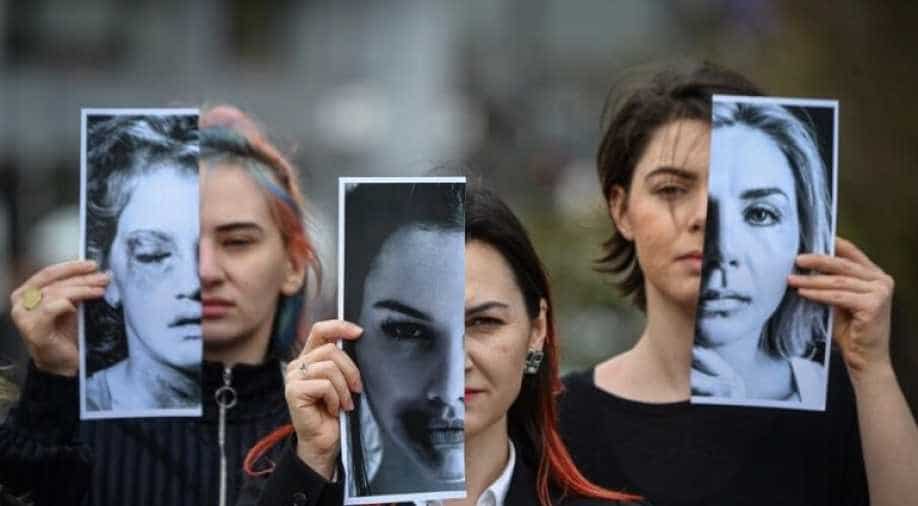 Activists of the "Declic" movement for women's rights hold printed half face pictures showing victims of domestic violence during a protest in Bucharest on March 4, 2020 Photograph:( AFP )

As the reported cases of domestic violence against women continue to rise globally, with more people staying in their homes during the COVID-19 pandemic, Europe has found a way to deal with it: in secret!

Many people are now trapped with their abusive partners due to the globally enforced shutdowns, whereby movement is allowed only to fetch essential supplies.

While many are too afraid to call the police owing to potential repercussions, women have found a new technique: using a code word.

As reported across Spain and France, which are now recording high cases of the virus, women who say the codeword “mask 19” to a pharmacist can protect themselves.

As reported by CNN, a woman in the French city of Nancy went to a pharmacy, and soon after, her abusive partner was arrested by the police.

French authorities are now asking victims to go to the pharmacy in case they need protection against their abusers.

The world has witnessed a spike in domestic violence, be it Australia, India, or Europe. As people’s regular lives are abruptly disrupted, partners become abusive. There are many studies in place that underline the increase in aggressive behaviour during stressful events, such as a global pandemic, with a cloud of uncertainty!

As reported by CNN, similar patterns of spike in abuse were recorded during the 2008 economic crisis, during times of natural calamities, and somehow also during big sporting events!

According to Christophe Castaner, the French Interior Minister, there has been a 36 per cent increase in cases of domestic violence that required police intervention, in Paris alone!

The French government acted quickly, and has offered to pay for 20,000 nights in a hotel room.

However, as most emergency services have been mitigated to deal with the COVID-19 crisis, the fear of not delivering help to victims in time has overtaken the narrative.

Away from Europe, Australia recorded most domestic violence- related searches in the last five years on Google, an approximate increase of 75 per cent.

An additional aid of US $92 million was introduced to help victims of domestic violence in the midst of the pandemic.