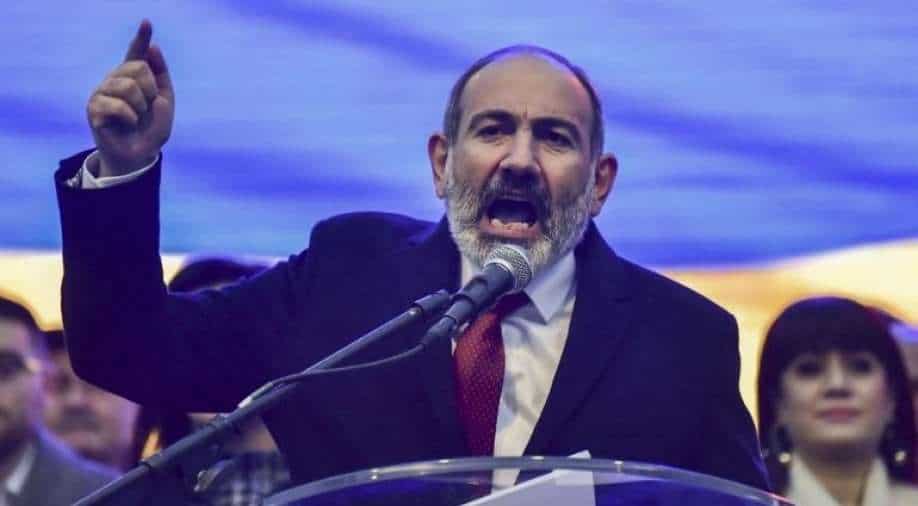 Armenian Prime Minister Nikol Pashinyan delivers a speech during a rally of his supporters at Republic Square in downtown Yerevan Photograph:( AFP )

Facing fire for his handling of last year's disastrous war with Azerbaijan, Pashinyan filled Yerevan's central Republic Square with more than 20,000 supporters, as government opponents demonstrated outside parliament to demand his resignation

Armenia's embattled Prime Minister Nikol Pashinyan told thousands of rallying supporters on Monday that he was ready to hold early elections to bring the country out of a political crisis.

Facing fire for his handling of last year's disastrous war with Azerbaijan, Pashinyan filled Yerevan's central Republic Square with more than 20,000 supporters, as government opponents demonstrated outside parliament to demand his resignation.

The rival rallies came with Pashinyan under increasing pressure for his handling of the war over the disputed Nagorno-Karabakh region, which saw Armenia suffer heavy losses and agree to hand over swathes of territory to Azerbaijan.

The political uncertainty is threatening to set off a chaotic power struggle in Armenia, an impoverished ex-Soviet republic on the borders of Turkey and Iran.

"Let's go to the polls and see whose resignation the people are demanding," said Pashinyan, who swept to power after spearheading peaceful protests in 2018.

He admitted to making mistakes and asked for forgiveness, but denounced those he said were trying to undermine the country's democracy.

"Only the people can decide who will remain in power," said Pashinyan, adding that old rivals are trying to undermine his government.

Pashinyan, in power since 2018 in the ex-Soviet republic of less than 3 million people, is facing a crisis after the army last week demanded he step down, prompting him to decry a coup attempt and sack the army's top general.

The president, however, refused to sign off on the general's removal on Saturday, declaring it unconstitutional.

Pashinyan has sent back his decree demanding the general's dismissal to the president's office.

Pashinyan has faced calls to resign since last November when he agreed to a Russian-brokered ceasefire that halted six weeks of fighting between ethnic Armenian and Azeri forces over the region of Nagorno-Karabakh.

His critics accuse him of bungling the conflict in which Azerbaijan made territorial gains in and around Nagorno-Karabakh, an enclave internationally recognised as part of Azerbaijan but populated and until recently fully controlled by ethnic Armenians.

Pashinyan has accepted responsibility for the conflict's outcome but rejected calls to resign.