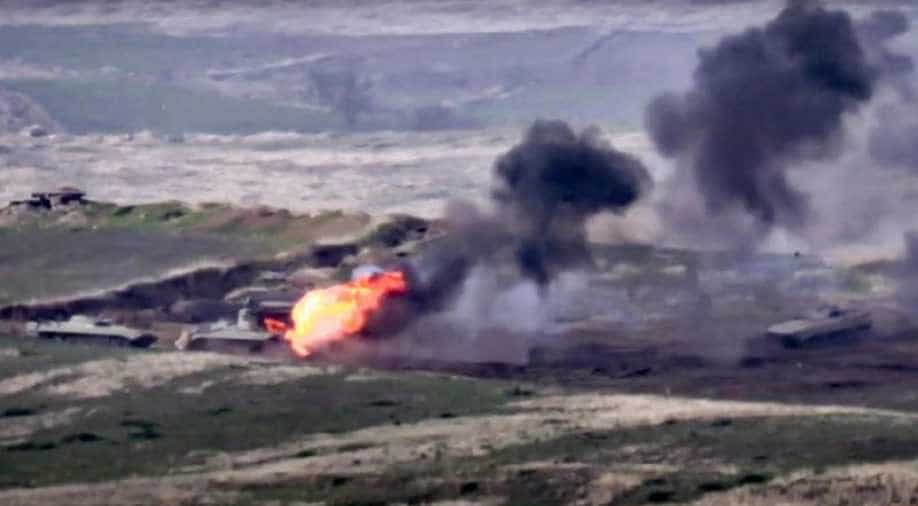 Tensions flared up between Armenia and Azerbaijan on Sunday over clashes in which Yerevan said Azeri forces shelled the breakaway region of Nagorno-Karabakh, and Baku accused Armenian forces of targetting Azeri military and civilian positions.

Armenia on Sunday declared martial law and a military mobilisation as Baku and Yerevan reported civilian casualties in heavy fighting along the Karabakh frontline.

"The government has decided to declare martial law and a total mobilisation," Prime Minister Nikol Pashinyan wrote on Facebook.

Tensions flared up between Armenia and Azerbaijan on Sunday over clashes in which Yerevan said Azeri forces shelled the breakaway region of Nagorno-Karabakh, and Baku accused Armenian forces of targetting Azeri military and civilian positions.

The worst clashes since 2016 have raised the spectre of a fresh large-scale war between arch enemies Azerbaijan and Armenia that have been locked for decades in a territorial dispute over Nagorny Karabakh.

Karabakh's leader Araik Harutyunyan told an emergency parliament session in the enclave's main city of Stepanakert that he had "declared martial law" and a mobilisation of all those fit for military service.

Armenia said earlier Sunday that Azerbaijan attacked civilian settlements in Nagorny Karabakh including  Stepanakert, with the attacks killing of a woman and child.

Azerbaijan's defence ministry said it had launched a "counter offensive to suppress Armenia's combat activity and ensure the safety of the population," using tanks, artillery missiles, combat aviation and drones.

The two countries have long been at odds over Azerbaijan’s breakaway, mainly ethnic Armenian region of Nagorno-Karabakh which declared independence during a conflict that broke out as the Soviet Union collapsed in 1991.

Though a ceasefire was agreed in 1994, Azerbaijan and Armenia frequently accuse each other of attacks around Nagorno-Karabakh and along the separate Azeri-Armenian frontier.

In July, heavy clashes along the two countries' shared border -- hundreds of kilometres from Karabakh -- claimed the lives of at least 17 soldiers from both sides.

During the worst recent clashes in April 2016, around 110 people were killed.

The rebel defence ministry claimed its troops shot down two Azerbaijani helicopters and three drones. The claims were denied by the defence ministry in Baku which said its forces were responding to an Armenian offensive.