An Armenian woman and child were killed Sunday when heavy fighting erupted between Azerbaijan and Armenian separatists, with the two foes accusing each other of starting fighting that led to casualties on both sides.

Talks to resolve the Karabakh dispute -- one of the worst conflicts to emerge from the 1991 collapse of the Soviet Union -- have been largely stalled since a 1994 ceasefire agreement.

"There are reports of dead and wounded among civilians and military servicemen," the spokesman for the Azerbaijani presidency, Hikmet Hajiyev, said in a statement.

Karabakh's ombudsman Artak Beglaryan said "there are civilian casualties" among the region's population.

Separately, a spokesman for the Armenian defence ministry said an Armenian woman and child were killed in Karabakh.

The worst clashes since 2016 have raised the spectre of a fresh large-scale war between arch-foes Azerbaijan and Armenia that have been locked for decades in a territorial dispute over Nagorny Karabakh.

A major confrontation between the ex-Soviet Caucasus neighbours would draw in big regional players Russia and Turkey.

On Sunday morning, Azerbaijan started "active bombing" along Karabakh's frontline and of civilian targets, including in the main city Stepanakert, Karabakh's presidency said.

- 'We will win' -
The claims were denied by the defence ministry in Baku which said its forces were responding to an Armenian offensive.

Hajiyev said Armenian forces in Karabakh "blatantly violated the ceasefire regime and, using large-caliber weapons, mortar launchers and artillery have launched an intensive attack on the positions of the armed forces of Azerbaijan along the frontline."

"Let us stand firmly behind our state, our army... and we will win. Long live the glorious Armenian army!" Armenian Prime Minister Nikol Pashinyan said on Facebook.

Azerbaijan's transport ministry said it has "put restrictions on internet traffic" in the country "in order to prevent Armenian provocations."

In July, heavy clashes along the two countries shared border -- hundreds of kilometres from Karabakh -- claimed the lives of at least 17 troops from both sides.

During the most recent serious clashes in April 2016, some 110 people were killed.

France, Russia and the United States have mediated peace efforts as the "Minsk Group" but the last big push for a peace deal collapsed in 2010. 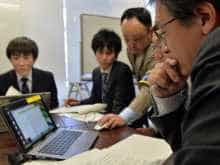