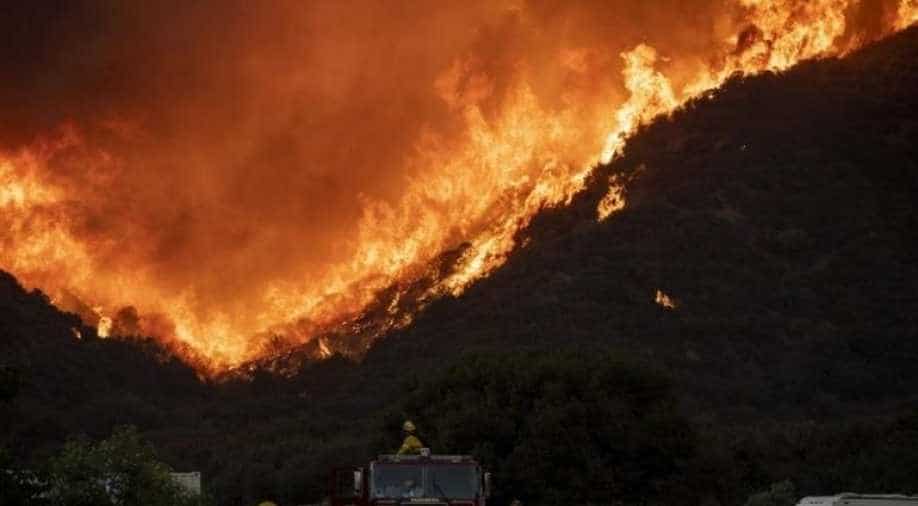 Owing to the dangerous conditions, thousands have been evacuated across the state, especially in the southern region

California is currently witnessing a wildfire, with extremely dangerous heat conditions to persist for the next few days. In Palm Springs alone, the temperature is expected to touch 41 degree Celsius.

Owing to the dangerous conditions, thousands have been evacuated across the state, especially in the southern region. Over 300 personnel are fighting to contain the wildfire in the US state of California.

The fire is being called the “Apple Fire” by frontline firemen, who commonly names wildfires. The current spot of the fire lies east of Los Angeles and continues to blaze.

As per the California Department of Forestry and Fire Protection, the Apple Fire ripped through 60 square kilometres of dry bush and timber, and has put the counties of Riverside and San Bernardino at risk of heavy damage.

The fire began on Friday when two small fires were reported in Cherry Valley, which falls close to the city of Beaumont, at least 137 kilometres east of Los Angeles. The containment efforts were delayed as the blaze could not be brought under control over the weekend.

The authorities have employed all resources at hand to control the blaze. Besides the ground, air support has been deployed. Even though no direct injuries or fatalities have been reported so far, one home and two buildings have been destroyed.

Considering the ongoing coronavirus pandemic, the smoke from the flames could put the vulnerable in the hospital.

In the county of Riverside alone, 8,000 people have been asked to vacate their homes. Additional orders to evacuate were commissioned for canyon, foothill, and mountain regions around the country.

California, famous for its hiker trails and beaches has shut down all camping areas and hiking activity in the view of the current inferno.

On Saturday, the temperature touched 41 degree Celsius (105F), causing poor air quality in the region, with smoke visible across the region. The National Weather Service in the US has called the fire would trigger “dangerously hot conditions” across southern parts of the state.

So far, people living across 2,586 homes have been asked to evacuate. Over the weekend, the fire engulfed 4,125 acres, up from 700 acres earlier on Friday.