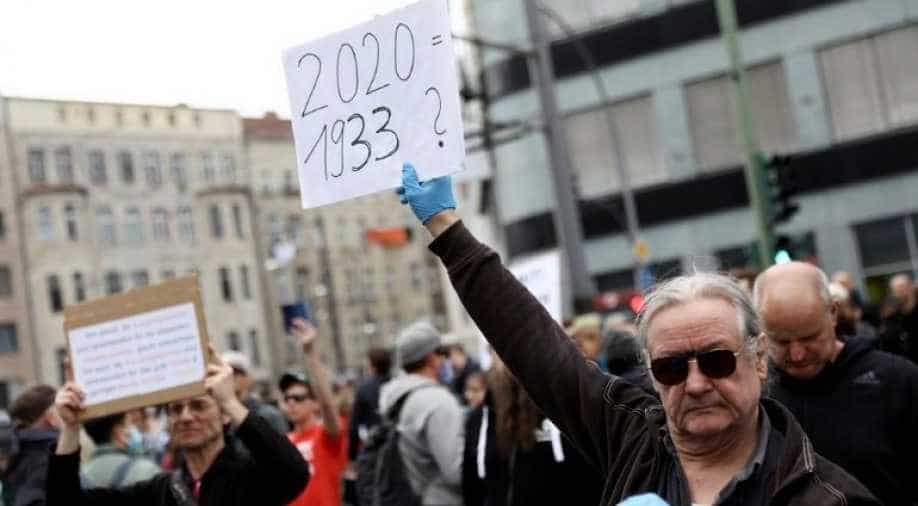 With an increase in the positive coronavirus cases in Germany, the local authorities are now reimposing some restrictions to contain the spread of the virus.

However, some of the local groups are not happy with this decision as they feel the rules are violating people’s rights and freedoms.

Demanding 'I want my life back', anti-vaccination activists took to streets to protest against the measure imposed by the government. The local police estimated a presence of nearly 17,000 people which included anti-vaccination activists, libertarians and constitutional loyalists. There was also a small far-right presence with some marchers carrying Germany’s black, white and red imperial flag.

The protestors held banners that read 'We are making a noise because you are stealing our freedom!’ and ‘Do think! Don’t wear a mask!’. Changing the lyrics to 'We are free people', the protestors sang and danced to Queen's "We will rock you" song.

Claiming the masks to be 'enslaving the people', the protestors made it clear that they do not want to wear face masks. Berlin Police filed a complaint against the organiser of the march, alleging the organiser of failing to ensure marchers wore masks and kept their distance.

"Thousands #Covidioten celebrate in #Berlin as "the second wave", without a gap, without a mask. They not only endanger our health, they endanger our successes against the pandemic and for the revitalization of the economy, education and society. Irresponsible!,” tweeted Esken.