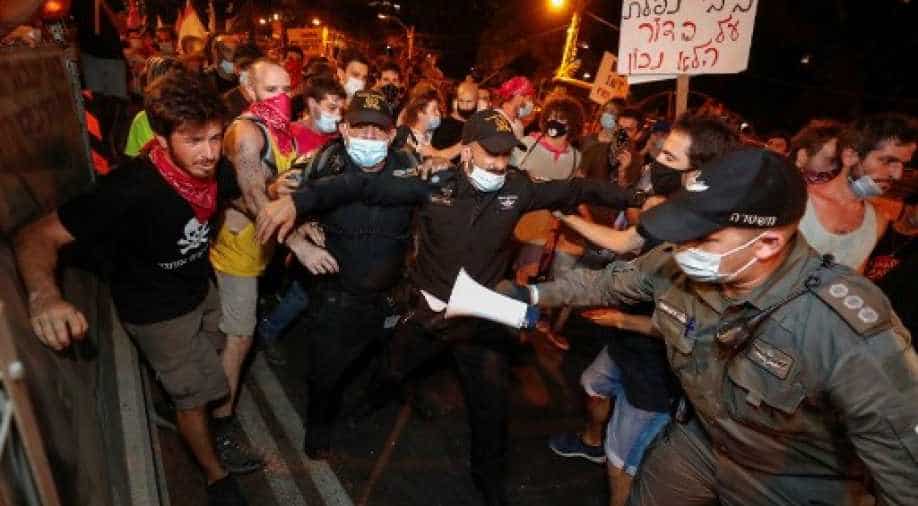 Anti-Netanyahu protests have been going on since July to denounce Netanyahu's handling of the virus and the economy.

Protesters took to the streets in Israel over Prime Minister Benjamin Netanyahu's move to limit demonstrations due to the coronavirus pandemic.

The protesters hit out against the government's handling of the coronavirus crisis even as a new law recently approved by Parliament banned citizens from holding demonstrations more than 1 km from their homes amid strict coronavirus restrictions.

Large scale protests were witnessed in Tel Aviv and Jerusalem with scattered demonstrations elsewhere in the country. Isreal reportedly has one of the world's highest coronavirus infection rates per capita as the country struggles to fight the second wave of infections.

Israel currently has 280,000 confirmed coronavirus cases and over 1,900 fatalities.

The protesters clashed with police in some areas with placards “Bibi, you are destroying my future” and "Go away" as police said the demonstrators were not observing social distancing norms and were putting others at risk as protests swelled in the Israeli capital Tel Aviv.

Police claimed the march was "illegal" as protesters took the main streets in thousands despite COVID-19 restrictions in place. Reports said the protesters broke through a barricade in Tel Aviv hurting several cops.

Reports claimed some tried to protest in front of Netanyahu’s private residence but were resisted by police action.

Anti-Netanyahu protests have been going on since July to denounce the Israeli prime minister's handling of the virus and the economy.