Ancient globe, bought for £150 at Welsh antique fair, fetches £116,000 at auction. Know what makes it valuable 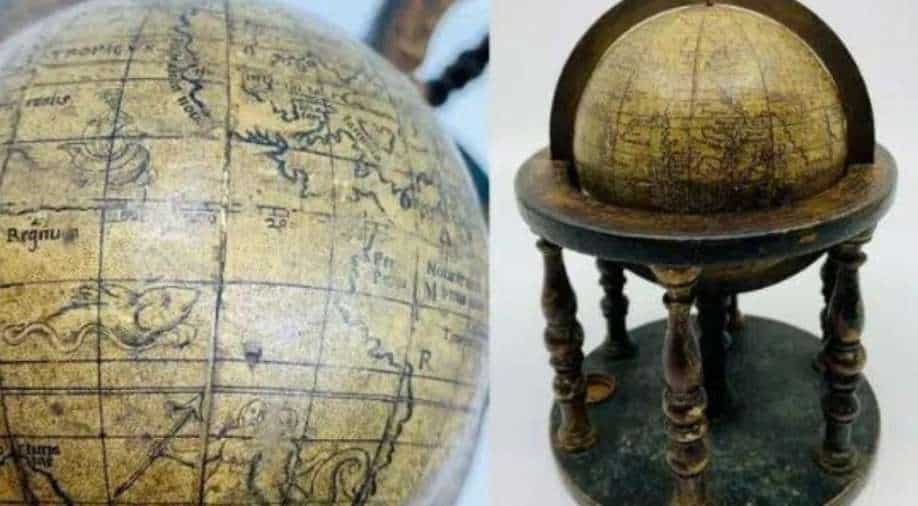 The 16th-century old globe was sold to a private buyer in New York, who was bidding online. (Image credit: hansonsauctioneers.co.uk). Photograph:( Others )

The seller, who paid £150 to buy an ancient globe at a Welsh antique fair, was left stunned and dumbstruck when it was sold for a whopping price, fetching six figures at an auction on Thursday (December 16).

A 16th-century old globe created a buzz as it sparked an intense bidding war during the auction by UK-based Hansons Auctioneers, who stated that the item is believed to be the oldest example of its kind offered at auction.

The globe is a carved wood and paper sphere and it is It is believed that it dates back to the 1550s or 1560s. The auctioneers mentioned that several museums could not help in figuring out the 16th-century terrestrial globe because they had nothing like it in their collections, which makes the item rare.

To grab one of the "rarest objects" ever uncovered by Hansons Auctioneers, five phone bidders battled with the internet to buy the 470-year-old globe. The item was eventually sold at £116,000 to a private buyer in New York, America, who was bidding online.

ALSO READ | Wikipedia co-founder sells NFT of first ever edit made on its site for $750,000

The seller, who was watching the auction online said, "I thought I was pushing the boat at £150 when I bought it during the pandemic. I had no idea it was so important and valuable."

She added, "I watched the auction with my friend, my husband and a glass of wine. My friend was crying, I was in shock and my husband was totally and utterly dumbstruck. It goes without saying that I'm delighted."

History and significance of the globe

Jim Spencer, who is the head of Hansons' Library Auction, came across the antique item when the seller took the object along for free valuation at Hansons’ Staffordshire saleroom, Bishton Hall.

After intense research, it was revealed that the globe was an incredibly rare circa 1550/60 globe. It was either made by Francois Demongenet, a French geographer known for globe gores which became a model for other makers. Or, it was a derivative of his design.

The globe shows a world before the country Australia had been discovered. The country, which by Dutch explorer Willem Janszoon in 1606, appears as part of a southern landmass called Terra Incognita.

In the same globe, Japan is called 'Sipannge' and the islands near Java are termed 'Gryforum Insule'. North America has been marked 'Devicta ann 1530' and South America is marked 'Nova Terra Inventa anno 1492' and 'Canibales Tropophagi'.

"A 16th century globe. One of the earliest in existence. It doesn't even show Australia. Europeans hadn't set foot on it when it was made circa 1560," Hansons Auctioneers noted.

Spencer said, "I'm delighted for all concerned. This is an exceptional result. This object truly deserved to excel. To me, the globe feels priceless. It’s just so early and fragile to have survived the centuries."

"One specialist told me 16th-century globes are nigh on impossible to come across. In terms of value, the general consensus was that it was a 'complete unknown'. We think our globe could be the earliest ever offered at auction," he added.

It is important to note that the oldest terrestrial globe in the world is the Erdapfel from 1492. The second oldest, the Ostrich Egg Globe from 1504, which was sold at the London Map Fair in 2012. Third is the Hunt-Lenox Globe, circa 1510.