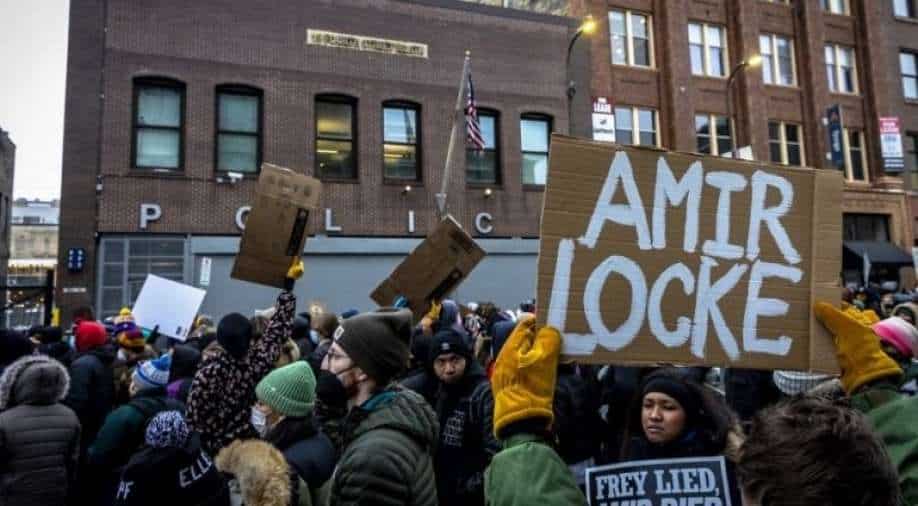 Hundreds gathered in cold weather during a rally in protest of the killing of Amir Locke, outside the Police precinct in Minneapolis, Minnesota Photograph:( AFP )

At least 500 demonstrators rallied at Government Plaza in Minnesota's largest city three days after Locke, 22, was shot on his couch by police

Hundreds of protesters took to the streets of downtown Minneapolis demanding justice in the fatal police shooting of a young Black man, Amir Locke, during a "no-knock" raid on his apartment earlier this week.

At least 500 demonstrators rallied at Government Plaza in Minnesota's largest city three days after Locke, 22, was shot on his couch by police.

The crowd assembled in below-freezing temperatures, demanding an unconditional ban on no-knock warrants, the dismissal and arrest of officers involved in the shooting, and the resignation of the mayor and police chief.

Amir Locke's life mattered. He was only 22 years old and had his whole life ahead of him. His family and friends must now live the rest of their lives without him. (1/3)

Authorities in the northern US city, still reeling from the police murder of George Floyd in 2020, said Amir Locke, 22, was shot Wednesday by officers carrying out a search warrant on the apartment he was in.

In the video, an officer uses a key to unlock the door and then a group of officers enter while shouting "Police, search warrant!"

Locke, who was on a couch, starts to rise from beneath a blanket, with a gun in his hand, when police fire.

The total time between the officers' entrance and the shots fired was less than ten seconds. Locke was pronounced dead at hospital.

The day after the killing, police released video footage from the raid, which showed Locke was holding a gun as he twisted beneath a blanket on his sofa after being roused by officers moments before he was slain.

Police have said the officers were exercising a "no-knock" search warrant, which authorizes police to enter private property without first alerting occupants or announcing their presence.

The warrant was issued in relation to a homicide probe led by detectives from the neighboring Saint Paul Police Department. Locke was not named in the warrant, and Minneapolis police have acknowledged it was unclear how or whether he was connected to that investigation.

Locke's death has reopened the wounds caused by the killing of Floyd in May 2020, when white ex-Minneapolis police officer Derek Chauvin knelt on his neck for nearly nine minutes.

Without predicting the outcome of the investigation, Minnesota's Democratic governor Tim Walz said the circumstances of Locke's death "illustrate the need for further reform" on the police force beyond the changes made after Floyd's death, particularly the execution of search warrants.