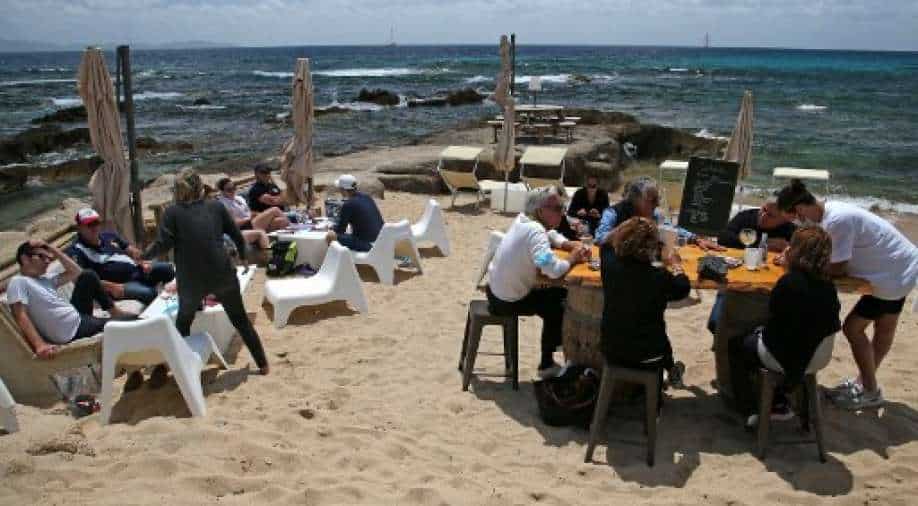 Members of staff serve customers at a restaurant on a beach in Ajaccio, on the French Mediterranean island of Corsica. Photograph:( AFP )

Amid large scale vaccination, the French government announced wearing face masks outdoor will be dropped with nighttime curfew to end on Sunday.

France had earlier set the deadline for ending night curfew to June 30 but brought it forward amid declining virus rates and success in vaccination.

According to the French health ministry, 60 per cent French citizens have received at least one dose of the vaccine.

However, health minister Olivier Veran said on Thursday that health workers were lagging behind in vaccination and warned that it may be made mandatory as they are in contact with vulnerable populations, especially in care homes.

Veran added that government plans to allow nightclubs to reopen next month. President Emmanuel Macron had said earlier that the decision on nightclubs will be made on June 21.

France had permanently closed the nightclubs when the pandemic hit last year. The third lockdown was eased last month with restaurants and bars allowed to serve indoor for the first time in seven months.

Despite lifting the mask ban, France reported over 3,000 COVID-19 cases on Wednesday but is projected to fall by month-end, according to health authorities.

Reports say the government has made exceptions for the masks especially in crowded shopping areas.

Amid the reopening, Disneyland Paris reopened on Thursday with visitors over six years asked to wear masks including obsevering social distancing measures.