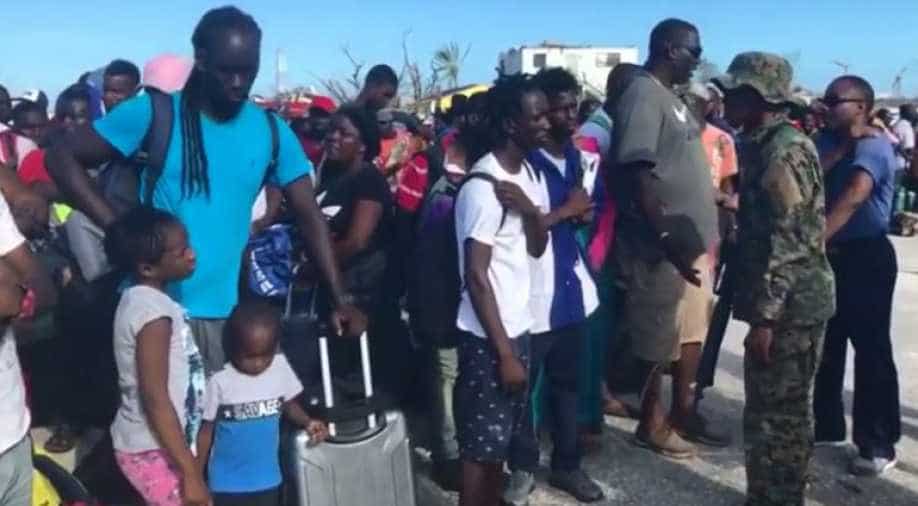 A loosely coordinated armada of passenger planes, helicopters and both private and government boats and ships -- including redirected cruise liners -- was converging on the horribly battered Abaco Islands, the epicenter of the vast storm's destruction, to help with the evacuation

Bahamians who lost everything in the devastating passage of Hurricane Dorian were scrambling Saturday to escape the worst-hit islands by sea or by air, after the historically powerful storm left at least 43 people dead with officials fearing a "significantly" higher toll.

A loosely coordinated armada of passenger planes, helicopters and both private and government boats and ships -- including redirected cruise liners -- was converging on the horribly battered Abaco Islands, the epicenter of the vast storm's destruction, to help with the evacuation.

In Freeport, thousands of people, many still disoriented by the week's events, were lining up at the port in hopes of boarding a Bahamas Paradise Cruise Line ship offering free passage to Florida.

More than 260 Abacos residents arrived Friday in largely spared Nassau on a government-chartered ferry, with a second en route.

Residents described brutal conditions facing those still on the islands. They said the smell of yet-to-be recovered bodies, along with rapidly mounting piles of garbage, was oppressive and unsanitary.

Hundreds or even thousands of people were still missing, officials said, and rescuers continued picking through jumbled mountains of debris in search of survivors. Morticians with body bags and refrigeration units were beginning to arrive.

Prime Minister Hubert Minnis said the death toll -- 35 so far in the Abacos and eight in Grand Bahama -- was likely to climb "significantly."

In a statement Friday evening, he called the loss of life "catastrophic and devastating."

UN relief officials said more than 70,000 people -- virtually the entire population of Grand Bahama and Abaco -- were in need of assistance after the storm reduced homes and businesses to matchsticks.

The US Coast Guard, Britain's Royal Navy and private organizations have been helping evacuate island residents to Nassau, but relief efforts have been severely hampered by damaged airport runways, piers and docks.

Chamika Durosier was waiting early Saturday at the Abaco airport. The island, she said, was unsafe.

"The home that we were in fell on us," she said. "We had to crawl -- got out crawling. By the grace of God we are alive."

She described the increasingly desperate plight of those left behind.

"Dead bodies are still around and it's not sanitary."

Those who have made it to safety awaited news of loved ones.

Diane Forbes, newly arrived at a gymnasium serving as a shelter in Nassau, was desperately searching for her two sons among some 200 evacuees.

On Tuesday, when last she heard from them, her sons told her that "they were hungry, and the scent of the bodies, the dead, was really getting to them."

Dorian, a monstrous Category 5 hurricane when it raked through the Bahamas last weekend, was buffeting southwestern Nova Scotia, Canada, on Saturday with tropical storm-force winds, the National Hurricane Center said at 11:00 am (1500 GMT).

The Canadian Hurricane Centre predicted a landfall near Halifax later in the day and issued hurricane warnings for parts of Nova Scotia and Newfoundland.

Earlier, Dorian brought flooding and widespread power outages but no major damage to the coastal Carolinas and Virginia.

In the Bahamas, the scene was very different.

With thousands of people left homeless, many were growing frustrated at the slow speed of relief and evacuation efforts.

"There's no gas station, no food stores, my job is gone," said Melanie Lowe of Marsh Harbour, whose house was partially destroyed. She survived the storm packed in a two-bedroom apartment with 16 other people.

As survivors began the first steps of rebuilding, arrangements were being made to care for the dead and account for the missing.

Mortuary workers in white hazmat suits, blue gloves and masks could be seen in Marsh Harbour carrying corpses in green body bags and loading them onto flatbed trucks.

President Donald Trump offered US support, adding in a video statement on Twitter, that "any cruise ship companies willing to act as stationary housing, etc., I am sure would be appreciated!"

The cruise ship Celebrity Equinox rerouted a planned trip with passengers on board to bring 10,000 sandwiches to the Bahamas, NBC said.

At the Abaco airport on Saturday, Tanya McDermott was waiting with her husband and young son for a plane to Nassau. Their home was badly damaged.

With the injured given priority on outbound flights, the McDermotts waited.

"We are going to wait around all day if we have to," Tanya McDermott said.

"We are going to hope for the best."