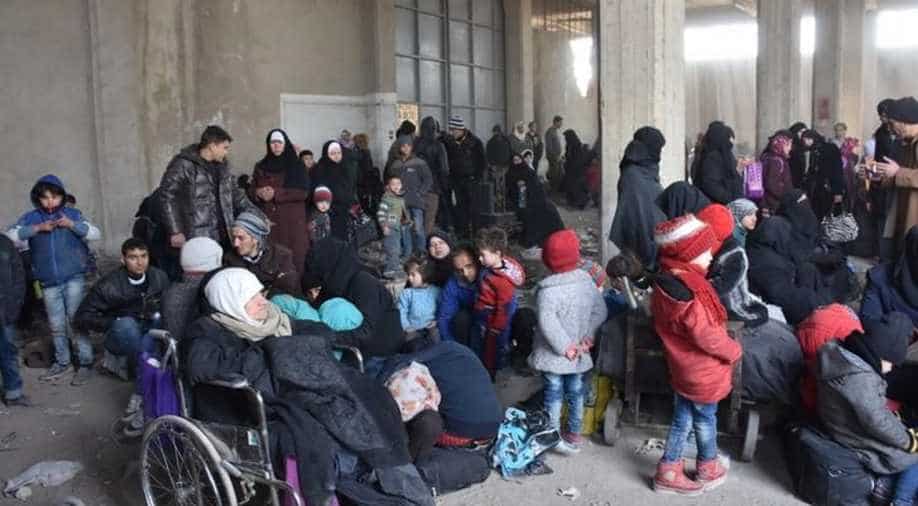 East Aleppo has been under government siege for more than four months, with international aid stocks exhausted and food supplies running low. In photo: Syrians that evacuated the eastern districts of Aleppo rest, while waiting to board buses. Photograph:( Reuters )

The Syrian government offensive to recapture rebel-held parts of Aleppo sparked international alarm on Tuesday, with the UN saying nearly 16,000 people had fled the assault and more could follow.

France called for an immediate UN Security Council session on the fighting, which has seen the army capture a third of opposition-controlled east Aleppo in recent days.

The fighting has prompted an exodus of terrified civilians, many fleeing empty-handed into remaining rebel-held territory, or crossing into government-controlled western Aleppo or Kurdish districts.

"Up to 16,000 people have been displaced, many into uncertain and precarious situations," he said.

The figure excludes civilians who have escaped to remaining rebel-held territory, and O'Brien warned it was "likely that thousands more will have no choice but to flee should fighting continue."

East Aleppo has been under government siege for more than four months, with international aid stocks exhausted and food supplies running low.

Government forces have advanced swiftly in their two-week operation, capturing all of the city's northeast in a major blow to the opposition.

The loss of their east Aleppo stronghold would be the worst defeat for rebels since Syria's conflict erupted more than five years ago.

The opposition has steadily lost territory in recent months to government forces bolstered by a Russian military intervention that began in September 2015.

Moscow says it is not involved in the Aleppo offensive, but a Russian defence ministry spokesman said Syrian government forces had seized "nearly half the territory occupied by rebels in east Aleppo in recent years".

"The careful and long-planned operations by the Syrian army have radically changed the situation over the past 24 hours," said General Igor Konashenkov.

A hospital with a capacity of up to 250 patients a day will be sent to the Aleppo region on Wednesday morning, according to Russian news agencies.

More than 250 civilians have been killed in the government's assault on east Aleppo since November 15, including nearly 30 children, according to the Syrian Observatory for Human Rights.

The monitor said at least 10 civilians were killed in a strike in the Bab al-Nayrab district on Tuesday and reported ongoing clashes in the Shaar and Tariq al-Bab neighbourhoods.

The Observatory said the civilian exodus continued Tuesday from neighbourhoods now on the front line.

An AFP correspondent said families were forced to sleep in the streets or in unfurnished apartments left empty by fleeing residents.

"Given the Syrian government's long and dark history of arbitrary detention and enforced disappearances on a mass scale, it is even more crucial that civilians are protected in newly captured areas of Aleppo city," said Samah Hadid, Amnesty's deputy director for campaigns in Beirut.

And Save the Children warned the assault was separating families and leaving thousands, including children, homeless and at risk.

"With so many people trapped in an ever-shrinking space, children can be little more than sitting targets for bombs," said Syria director Sonia Khush.

Backers of Syria's moderate opposition have expressed concern about the army's advances, but have shown little willingness to intervene.

"More than ever, there is an urgent need for a cessation of hostilities and unhindered access to humanitarian assistance," he said.

On the ground, residents expressed despair and uncertainty for the future, after months of food shortages and heavy bombardment.

Syria's conflict has killed more than 300,000 people and drawn in world powers including a US-led air coalition fighting the Islamic State group.

After a six-week probe, the Pentagon on Tuesday said intelligence errors resulted in a coalition strike that reportedly killed about 90 Syrian government forces in eastern Deir Ezzor in September.

Also on Tuesday, at least 1,200 including rebels and their relatives were evacuated from a rebel stronghold near Damascus to the northwest province of Idlib, the Observatory and aid workers said.

Local leaders in Khan al-Shih, southwest of the capital, struck a deal with Damascus that would see their town brought back under regime control in exchange for an end to the government siege.