Aleppo: The massive task of rebuilding a shattered city 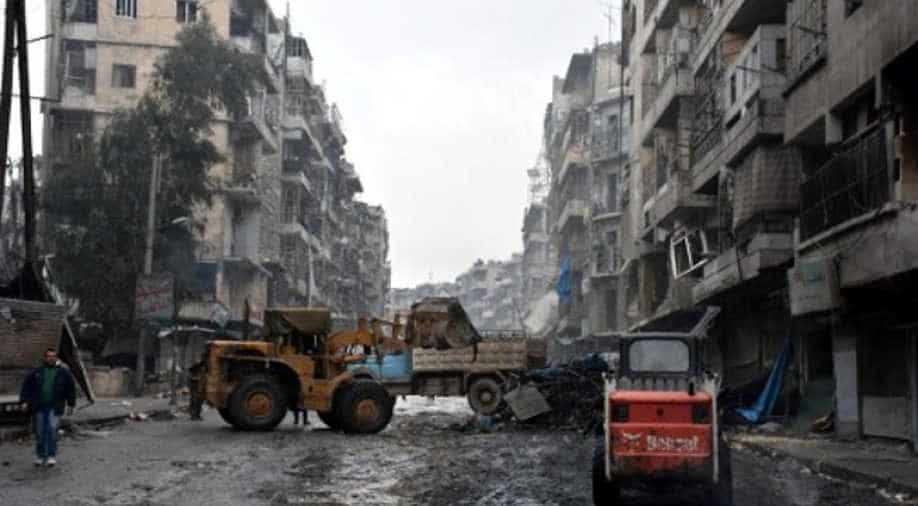 It will take many months and millions of dollars to breathe life back into Aleppo's devastated water, electricity, and transportation networks. Photograph:( AFP )

Midnight means lights out in Syria's Aleppo: as the clock strikes 12, overworked power generators shut off across the city, plunging war-ravaged neighbourhoods and heritage sites into darkness.

It will take many months and millions of dollars to breathe life back into Aleppo's devastated water, electricity, and transportation networks.

We sold our vacuum cleaner, what's the point in having one if we don't have electricity?' asked Umm Fayez, a housewife who lives in the central district of Furqan

Four years of fighting have transformed it from Syria's industrial and commercial powerhouse to a divided and dysfunctional city.

"We sold our vacuum cleaner, what's the point in having one if we don't have electricity?" asked Umm Fayez, a housewife who lives in the central district of Furqan.

"It's been two years since we used our washing machine. We wash everything by hand, but the water is too cold now and I can't take it any more," the mother-of-two told AFP, sitting in the dark amid piles of dirty laundry.

Rocket fire, air strikes and shelling partly or totally destroyed more than half Aleppo's infrastructure and buildings, according to a "preliminary, optimistic evaluation" by local authorities.

The main power station at Safirah to the southeast has been off line for two years because of the fighting.

Aleppo's residents are forced to rely on noisy generators that supply electricity through a web of thick cables snaking through scarred streets.

But they are shut down at midnight to save diesel supplies.

Umm Fayez's husband walks home every night from his sweetshop using a small torch to guide the way through pitch-black darkness.

"We have two projects that will re-establish electricity to Aleppo," an electricity ministry official told AFP, speaking on condition of anonymity.

He said new power lines would be laid from the neighbouring province of Hama within a year, but that it would cost more than four billion Syrian pounds, or about $8 million (7.6 million euros).

Residents are also impatient for water shortages to end, with the main pumping station currently operating at just a third of its capacity.

"We can only pump water to 20 per cent of Aleppo. Before the crisis, it was 70 per cent," said Issa Korj, chief mechanic at the Suleiman al-Halabi water plant.

He said it would take "many months" to repair the facility, but even then, water provision was likely to remain a problem for residents.

Most of the water pumped to Aleppo comes from the Euphrates Dam in the adjacent province of Raqa, which is held by the Islamic State jihadist group.

'Aleppo is one'
But before any major rebuilding projects can begin, local authorities must clear away barricades and sand berms that had divided Aleppo between the rebel-controlled east and the government-held west.

Bulldozers can already be seen in the bombed-out streets, clearing rubble and dismantling metal barriers.

"Opening up the roads will allow us to pump life back into the city with economic and social activity and public services," he added.

Aleppo's Old City, a renowned UNESCO World Heritage site -- is at the heart of this effort.

The district witnessed some of the most brutal moments of the battle for Aleppo, and restoring its celebrated buildings will pose major challenges.

Municipal teams are carefully sorting through the rubble, setting aside original centuries-old stonework that will be used in the restoration.

In the nearby district of Aqyul, Abduljawad Najed, 32, had to negotiate heaps of sand to check on his brother's house.

"It took more than an hour and a half," he said.

After the barricades were cleared, the same journey took Najed 10 minutes.

"Things were much easier and I was able to come by car," he said, loading some household effects into his small pick-up.

"Thank God, all the roads are now linked together. Aleppo is one again," he said.