Ahead of Olympics, survey finds COVID-19 infections in Tokyo may have jumped nine-fold 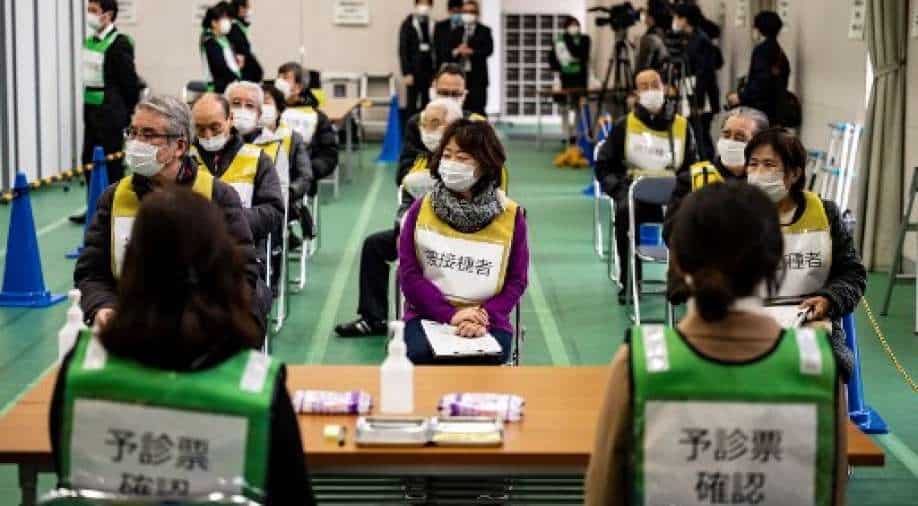 People sit as they take part in a Covid-19 coronavirus vaccination drill at the Kawasaki City College of Nursing in Kawasaki Photograph:( AFP )

There was also witnessed spike in antibody rates in Osaka and Miyagi Prefecture.

According to Japan's health ministry, the number of COVID-19 infections in Tokyo may have jumped by nine-fold since last summer after anti-body tests were conducted as the country prepares to host the Olympic games in July.

The health ministry in a report said testing on people in Tokyo had revealed that 0.91 per cent had antibodies to the virus, compared with about 0.1 per cent in a similar study in June.

There was also witnessed spike in antibody rates in Osaka and Miyagi Prefecture.

Japan had earlier imposed a one-month emergency as the number of coronavirus cases surged, nine other areas including capital Tokoy was also put under restriction. Prime Minister Yoshihide Suga has approved the extension of the state of emergency until March 7.

"Hospitalisation will remain high for some time to come, that is why we have to continue with these measures," the Japan PM said, adding, "each and every one of us needs to change the way we act if we are to contain the virus's spread." However, PM Suga said the restrictions will be lifted before March 7 in prefectures where the virus situation improves.

Japan's government has insisted the Olympic games will go ahead as planned in July after it was postponed last year as the pandemic took hold worldwide.

The country's Parliament had passed a new law strengthening enforcement of its virus restrictions which included fine on bars and restaurants which defy closure request with just five months left for the pandemic-postponed summer Olympics in Tokyo.

Japan currently has over 390,000 coronavirus cases and 5,832 fatalities as it grapples with the virus.