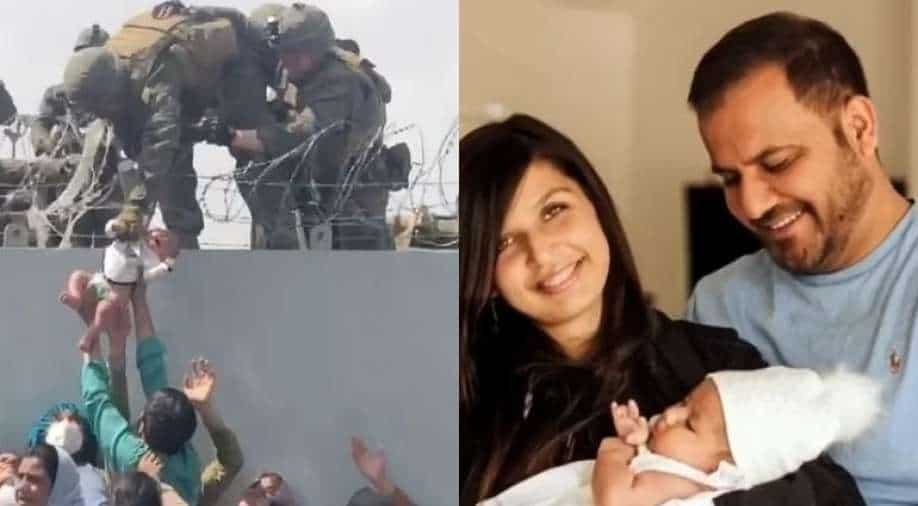 Afghan baby who was lifted over wall by US soldier now in Arizona. Picture credits: Reuters and CBS Photograph:(Others)
Follow Us

When Taliban took over Afghanistan on August 16, people tried to flee the country through Kabul Airport. During that time, several horrifying pictures and videos came forward showing the sad state of the people stuck in the country.

One such heart breaking image was of a baby being pulled up by a US Marine officer at the Kabul airport. The image started circulating on social media in which the army man was seen trying to pull the baby through the barbed wire of the airport.

The baby, dressed in a white t-shirt, can be spotted crying as she was stressed by all the commotion and violence around her. Thankfully, the soldier was successful in pulling over the baby to safety.

That same baby has now been identified as living with her family in Arizona, United States.

The father of the baby girl revealed that he was inside the Hamid Karzai International Airport when he saw his wife and his newborn baby outside and were being crushed by the large crowd gathered there.

He immediately requested a US soldier to bring his baby to safety. "He told me the only thing he could do was lift her over the barbed wire, but he said she'd be hurt. I told him I'll take the chance. I'd rather her get hurt than die," he said.

The soldier immediately understood the situation, noted details from the Afghan father and rushed to get the baby to safety.

Hameed, the Afghan father, was present in the airport for the whole month of August as he was serving as a linguist to assist US Marines with the evacuation effort. He had also missed the birth of his daughter to fulfil his professional duties.

When he heard reports of all US allies going missing or getting killed, he asked his wife to flee towards the airport on August 19 so that he could protect them.

"We got intel that people were getting killed, or going missing. By my affiliation [with the military], I knew my home would be next. It wasn't a matter of 'if,' but 'when," Hameed told CBS.

He had worked with the US Marines for the past five years and therefore "the only thing I trusted is that he was a Marine and that my daughter would be fine," he said.

The family has decided to give the eight-weeks old girl the middle name 'Marine' in honour of the US troops who helped them escape the Taliban regime.