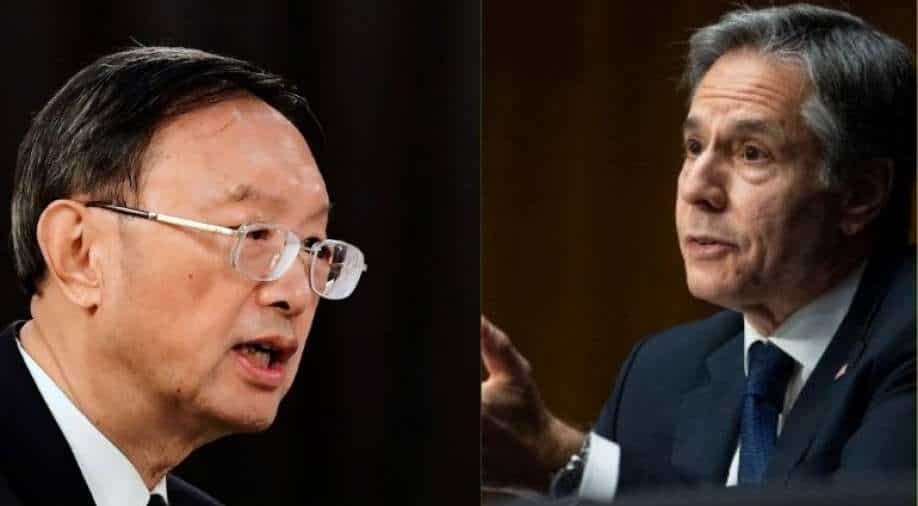 According to the Chinese state media, Yang told Blinken that some people in the US were spreading an "absurd story" about the virus escaping from the Wuhan laboratory.

US Secretary of State Antony Blinken speaking on the phone from the G7 summit in England to top Chinese Politburo official Yang Jiechi called for "cooperation and transparency regarding the origin of the virus".

"He also called on Beijing to cease its pressure campaign against Taiwan and peacefully resolve cross-Strait issues," a State Department statement said.

According to China's state television, Yang hit out at "multilateralism" while taking a dig at the ongoing G7 summit, saying: "Genuine multilateralism is not pseudo-multilateralism based on the interests of small circles."

"The only genuine multilateralism is that founded on the principles of the charter of the United Nations and international law," Yang said amid simmering tensions between China and the United States.

According to the Chinese state media, Yang told Blinken that some people in the US were spreading an "absurd story" about the virus escaping from the Wuhan laboratory.

Yang hit out at the US stating that it should look at its "own domestic serious human rights violations" and not use the "so-called human rights issues as an excuse to arbitrarily interfere in the internal affairs of other countries" even as the US government continues to corner China's human rights record in the restive Xinjiang province.

China's current stance on hitting out at multilateralism comes as world leaders met at the G7 summit in England. During the summit, German Chancellor Angela Merkel had said she would be supporting "value-based multilateralism".

Tensions between the China and the US has been on the rise for the past one year despite the exit of former President Donald Trump. The Biden administration recently passed the innovation bill in order to ensure US dominance in techonlogy, a move which was critised by China as "delusional".