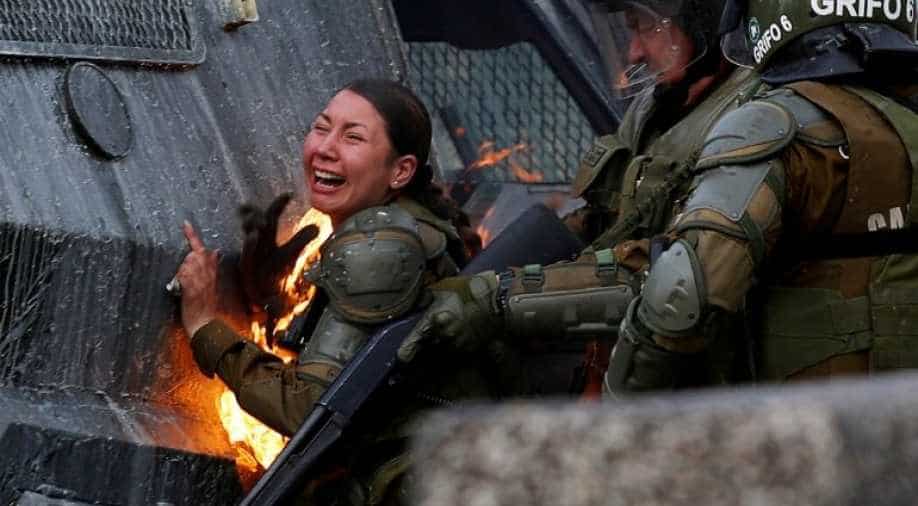 A riot police officer on fire reacts during a protest against Chile's government in Santiago, Chile November 4, 2019. Photograph:( Reuters )

Two police officers were engulfed in flames. They were helped by colleagues who used fire extinguishers and their hands to put out the fires.

Reuters photographers covering protests in the central Santiago rallying point of Plaza Italia were getting ready to capture images on Monday as the police set about clearing the square for the evening.

Jorge Silva, a Reuters chief photographer in South East Asia, has been in Chile covering the protests that started two weeks ago over public transport fare hikes and broadened into often violent demonstrations over inequality in one of Latin America's richest nations.

He was standing close to the Baquedano metro station that has remained shuttered amid arson attacks and watched as police tried to drive protesters away from a broad avenue leading out of the square.

As the police used tear gas canisters and water cannon against the protesters, he saw a series of Molotov cocktails thrown in the direction of the police.

Two police officers were engulfed in flames. They were helped by colleagues who used fire extinguishers and their hands to put out the fires.

Silva saw a flare out of the corner of his eye and swung his camera to capture an image just as the flames surged above the heads of the police officers.

"I realized a police officer had been set on fire by a Molotov and her team were trying to extinguish the fire," he said.

Three Reuters photographers captured images showing one of the officers, her helmet pulled off, grimacing in pain as her colleagues sprayed her with a fire extinguisher to try to put out the flames licking around her face.

Ivan Alvarado, a Reuters photographer based in Chile who documented the scene from a nearby rooftop, said the flames spread quickly.

"The officers were trying to put them out with their hands," he said.

Chile's Interior Minister Gonzalo Blumel visited the women in hospital on Monday evening and denounced the attack as "pure violence... nothing to do with the legitimate demands of citizens."

"It was violent, cowardly aggression against two police officers who were working to protect the safety of our compatriots," he said.

Henry Romero, a Reuters photographer usually based in Mexico who was also on the scene in Santiago, said the incident sparked an immediate response from police.

"From that moment things intensified, the police began to use a lot of gas and rubber bullets, the noise of the repeated fire was loud," he said.

A police source, who asked not to be named, said officers in the square followed standard operating procedure, deploying first water cannons, then tear gas. He said rubber bullets were only used in instances of "imminent danger" to police officers. "Control of public order is very complex," he said.

Reuters was unable to reach the families of the two police officers. The hospital where they are being treated did not respond to request for comment.

The two women are among 800 police officers injured in the demonstrations over the last two weeks, along with 1,650 protesters who have been hospitalized, according to human rights groups.