A ferry is coming to coney island. Here’s why some residents are angry. 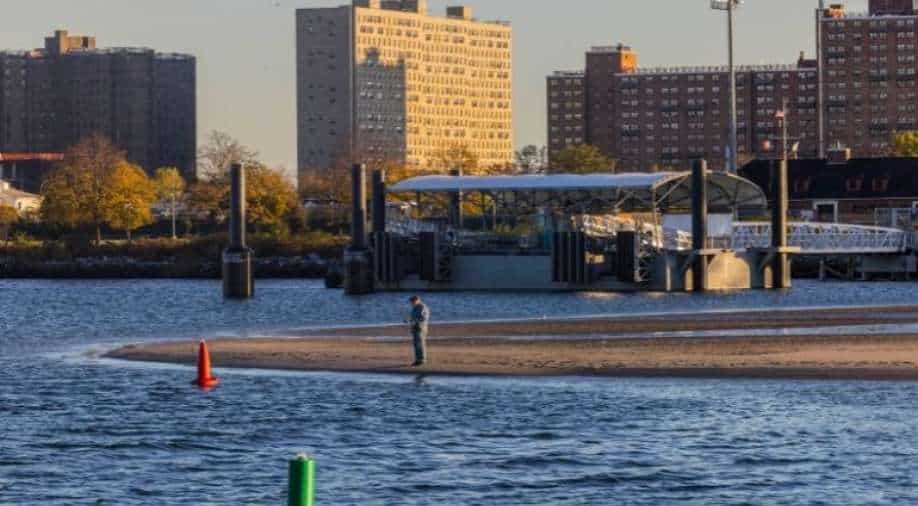 A man fishes at Coney Island Creek, on which a proposed ferry landing would built, in Brooklyn, Nov. 10, 2021. A new ferry service connecting the remote beachfront community to Manhattan may be coming at the expense of Brooklyn’s last remaining creek and the wildlife that live there. (Hiroko Masuike ©️ 2021 The New York Times) Photograph:( The New York Times )

Wilton Cartagena, who runs a grocery store on Coney Island, is relieved that a new ferry service connecting the remote beachfront community to Manhattan will cut the four-hour commute for his employees, most of whom live in the Bronx.

He anticipates that the ferries will also bring an economic boon to its shores, which are best known for an amusement park but tethered to a limited summer season. "Coney Island has been very neglected for a long time, so this is going to be good for business," said Cartagena, who owns J-R Market near the anticipated pier.

Except that what is good for business may be coming at the expense of Brooklyn's last remaining creek and the wildlife that live there. Scientists for the city's Parks Department, which oversees Coney Island Creek Park, say city officials pushed ahead with the plan to build the ferry landing on the creek despite concerns that a service there would damage the ecosystem and release toxic pollution.

The Coney Island Creek — popular among bird-watchers, fishermen, schoolchildren and even those who perform baptisms — attracts nearly 250 bird species, some of them rarities such as the white-winged dove and the thick-billed murre that fly all the way from the Arctic. The creek bottom is filled with horseshoe crabs, a major food source for the birds.

Construction of the pier and waves caused by the ferries will probably disrupt the habitat for the crabs that are dependent on quiet waters, scientists say, toppling the entire food chain and erasing a precious wildlife sanctuary in New York City.

The new ferry line, which is expected to cut the daily slog to Manhattan by half an hour, is part of outgoing Mayor Bill de Blasio’s flagship initiative to connect the five boroughs via water, and is tied to redevelopment efforts on Coney Island.

Concerns about the environmental impact flared up almost immediately after the city issued a feasibility study in 2018, offering as options two locations: one to the east and the other to the west of the narrow waterway that connects the creek with Gravesend Bay. The city initially did not consider a Coney Island service for the ferry project, and only started looking into it seriously three years ago.

The Economic Development Corporation, a semi-independent city agency in charge of the project, ultimately settled on the location to the west, just across Kaiser Park, saying it had more water depth and was less exposed to adverse weather.

But in recent weeks, local residents have stepped up their opposition to having the pier on the waterway, after they learned that scientists within the Parks Department had cautioned against the selection.

They have questioned whether there was pressure to rush the ferry service to meet de Blasio’s goal for a robust ferry system before his term ends and to support the luxury condominiums being built there by John Catsimatidis, a billionaire developer who has spent hundreds of thousands of dollars lobbying the city over the past three years to build a ferry stop on Coney Island.

A lobbying firm hired by Catsimatidis pushed officials for a stop on Coney Island as well as funding for a shuttle service from the ferry landing to the beachfront, where Catsimatidis’ condos and the amusement park stand.

Catsimatidis, in an interview, confirmed that sales of condo units hinged on an operational ferry service. He has already constructed two buildings as part of his Ocean Drive complex, and even though it was yet to be completed, ads were placed in newspapers with the catch: “Ferry to Manhattan Coming Soon!”

“As far as we’re concerned, we built two beautiful buildings and we spent $400 million,” he said. “You know, that’s a lot of money.” He used an expletive to describe the environmental concerns.

Although the ferry service is set to begin within weeks, residents are still asking the city to slow down.

Besides the effects on the wildlife, there are fears that dredging during construction and the shaking of waters by high-speed ferries would release carcinogens such as mercury, lead and dioxins trapped in the creek bed. The area sits across Calvert Vaux Park, a former industrial dump site, and toxins released in the air and water could affect nearby residents, many of whom live in affordable housing, scientists and environmentalists familiar with the area said.

Last month, video footage showed a subcontractor dredging the creek bed without following stringent protocols used to prevent contaminants from being stirred up. The city Economic Development Corporation responded by firing the subcontractor, saying in an email it had not followed rules properly.

Ann Valdez, 55, who lives in a public-housing complex right across the creek, started having breathing problems over the past couple of months, and her doctor prescribed her a nebulizer. She worried that her breathing would get worse when the ferries stir up toxins from the creek bed.

“People are going to get sick. I have children, grandchildren, and I wouldn’t want them to have to be exposed to that,” she said, adding, “The one thought in my mind is — environmentally, it’s crazy.”

The ferry service wouldn’t necessarily relieve commutes for residents like her either, she said, because she would have to pay extra for the ferry ride to lower Manhattan on top of the subway ride from Pier 11, which is a few blocks away from the nearest station. A one-way ticket on the ferry would cost $2.75, the same amount for a single ride on the subway.

Several scientists employed by NYC Parks told The New York Times that they had provided their superiors extensive data showing the negative impacts of operating a ferry service from Coney Island Creek, including the disruption to the birds and horseshoe crabs.

Crabs depend on quiet waters, and because the shoreline is not armored — meaning it cannot withstand boat waves — wake impacts and dredging during construction would lead to lower sand content, reducing shoreline habitat used by aquatic organisms.

The scientists said their comments were not reflected in a key report sent to regulators to help determine whether to issue a permit, and instead the document said the opposite — that there would be no significant environmental impact.

“We do not see how it was concluded that there will be no significant impacts from expanding ferry service to Coney Island Creek,” the parks scientists wrote to their superiors. “The criteria for such a determination were not set out and were never provided.”

Anessa Hodgson, a parks spokesperson, said the environmental impact statement went through several rounds of review by experts across the agency and also considered public comment. The Parks Department, she added, came to the “ultimate concurrence with the conclusions” outlined in the development agency’s final statement.

The state Department of Environmental Conservation said it follows its own process for approving projects, but that much of its assessment is based on statements provided by the applicant itself — in this case, the Economic Development Corporation. (The conservation scientists themselves do not inspect a site.)

The Army Corps of Engineers, a separate regulator that primarily looks at dredging and in-water construction activities, also concluded that there would not be a significant ecological impact and issued a permit.

In an email, the Economic Development Corporation said it took environmental concerns seriously and that construction would not have proceeded without full approval by the Department of Environmental Conservation and the Army Corps of Engineers.

Still, critics questioned the process and said that had the Parks Department aligned with its own scientists, regulators may have taken more time to assess the situation before issuing the permit. But that could mean delaying the launch of the ferry service to a later date — probably not during de Blasio’s tenure, which ends Dec. 31.

A former Economic Development Corporation official involved in the project said that despite the agency being technically independent, pushing back against the mayor’s wishes was virtually impossible.

“If Parks said that there are impacts, this can add significant cost to the project and results in a lot of arguing back and forth about what should be done, where and how,” said Ida Sanoff, executive director of the Natural Resources Protective Association.

Many residents want the ferry service and are hopeful that it would bring a much-needed boost to the local economy. Businesses are hoping it will make the seasonally operated amusement park open year-round.

The ferry at Coney Island Creek also means bringing more people to the side of Coney Island, opposite from the beach and amusement district, where they normally would not venture.

Assemblywoman Mathylde Frontus, whose district includes Coney Island and who has been leading the opposition to the Coney Island Creek location, said she wanted a ferry service too — but not at any cost.

“We would be thrilled and do backflips if we have a ferry in Coney Island, so we want it done properly,” she said.

“If we’re not ready now, we should in fact wait a little longer. Our health is so important that it’s much more important to have it done the right way than any old way.”