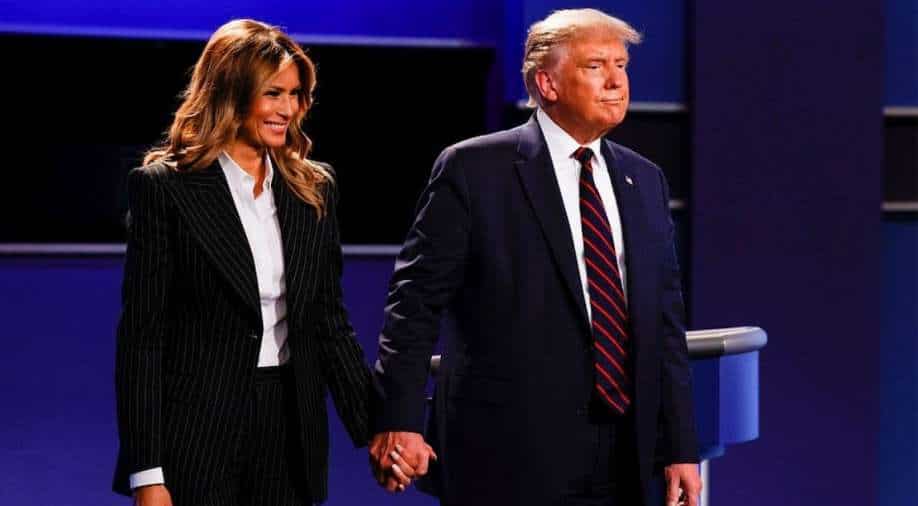 The Trumps leave behind a legacy of image-making and manipulation that will be as much a reference for political pundits and style strategists as that of the Reagans, the Kennedys and the Obamas

Few presidents have exploited the theatrical grandeur of the job quite as enthusiastically or as cynically as Donald Trump, from his proliferating forests of flags to his gilding of the Oval Office. Few have been as strategic about the power of caricature or had such a complicit wife and court to bolster the spectacle. As a group, they tapped into the dregs of “Dynasty” and “The Bonfire of the Vanities” past that sits nestled in our lizard brains. For four years, we parsed soap opera chic instead of “The West Wing.” The visuals demanded attention, just like the tweets.

But while we will not have that final photo-op closure as the outgoing first family welcomes the new residents to the White House — that norm, like so many others, has been trampled — the Trumps leave behind a legacy of image-making and manipulation that will be as much a reference for political pundits and style strategists as that of the Reagans, the Kennedys and the Obamas.

The political costume department of our collective imagination will never be the same.

There was a reason the president complained, publicly, about Vogue never giving his wife Melania a cover (at least not after he entered politics). A reason he complained, too, about designers vociferously announcing early in his term that they would not dress the first lady. (Who cares? The Trumps could always buy the stuff.) A reason he and his family built chunks of their empire on the wardrobe of ersatz aspiration. They understood the mythmaking power of appearance and how it sends tendrils of connection to us all.

There was no better example than Trump himself. He didn’t just sell his own merch; he wore it. Except, that is, for the oversize suits, which matched the overlong ties (if they were Scotch-taped together, who cared; they looked good from the outside) and became symbols of the overwhelming ego. Those were Brioni.

His willingness to make himself into an orange-tinted, vanilla-custard-combover meme invited mockery — until some realized that, silly as the president’s appearance may have seemed, it was also, in its singularity and consistency, unforgettable. As Doug Mills, a photographer for The New York Times who has covered every president since Ronald Reagan, said, the result was “iconic.”

Adding to the effect was Melania Trump, his ornamental equal, able to manipulate public perception strategically on her own. And cast in the supporting roles were, first and foremost, Ivanka and Jared, the effective prom king and queen, skin and hair and teeth polished to an impenetrable sheen. Arrayed beside them, like a Foxified Greek chorus, Tiffany Trump, Lara Trump, Kimberly Guilfoyle, Hope Hicks and Kayleigh McEnany. Plus Don Jr. and Eric.

They were embodiments of the president’s ideas of outmoded gender norms and what it meant to “dress like a woman” — and as a man for that matter — in matching red, white and blue Chiara Boni wrap dresses and pumps, false eyelashes batting against their cheeks, carefully tended locks blowing in the breeze, artfully cultivated stubble like an advertisement for masculinity from the school of Axe body spray.

Donald Trump is vacating office with the look, if not his reputation, intact, although increasingly it has taken on a whole new cast. What was once seen, on screens and in many the mind’s eye, as the brazen self-branding and narcissism of a reality TV star looks more like simple mendacity. From the beginning, Trump’s appearance was a sham. We should have known that such artifice was as much a part of his moral makeup as his cosmetic kit, and there was more to come. It was always part of the picture.

The scene was set even before Trump entered the White House, when Melania Trump wore a fuchsia pussy-bow Gucci blouse to watch her husband debate Hillary Clinton just days after The Washington Post released the now notorious “Access Hollywood” audio tape. Immediately the gleeful speculation started: She was trolling her husband. She was using clothes to send a message.

If it wasn’t the message we expect potential first ladies to send through fashion — that would be about political outreach and economic boosterism, not marital discord — still, it seemed like a message of some sort, suggesting that Melania Trump was attuned to the tools of her potential job.

Besides, if it wasn’t a message, what was it? A wardrobe coincidence? Could such willful disregard of external perception be possible for a woman who had been a model? Or was it all meta-commentary on our own expectations of first ladies? Who, exactly, was she toying with?

She remained enigmatically silent, and thus began a popular addiction to reading her clothes for clues.

Next up was the inauguration, when Donald Trump wore a Brooks Brothers overcoat like so many presidents before him: Abraham Lincoln and John F. Kennedy and Barack Obama. Beside him, his wife wore a powder blue Ralph Lauren suit and matching gloves, her hair in a decorous twist. The reference was also Kennedy: Jacqueline. The designer was American. The interpretation was positive. Her husband said he wanted to bolster Made in America. Both were wearing his words on their back.

That lasted a hot second — until Melania Trump chose a black Dolce & Gabbana jacket for her official portrait.

It was one thing when she wore a Dolce lace mantilla to meet the pope on her first international tour; one thing even when she wore the label’s $51,000 floral jacket at the G-7 summit in Sicily; one thing to choose an Italian luxury brand — even one run by designers known for their own egregious comments on weight, sexuality, ethnicity — while making appearances in Italy. (That could be spun as local outreach.)

It was another thing entirely to choose that brand for the photo that would adorn the East Wing website for an entire term. That was more like a riposte to first lady tradition and a statement of intent: I will not be forced into the mold that was made for me.

And so it went.

For every New Look Dior red suit Trump wore to accompany her husband on his state visit in France, for every brand worn to flirt with diplomatic dress, there was a completely unrelated brand worn to reassert the primacy of her own taste, as opposed to any political exigency. For every Burberry shirt and Michael Kors skirt worn to deplane in England and gesture to the special relationship between the United States and Britain, a moment like the pith helmet in Kenya, a colonial costume that seemed like an affront. For every pro-mask PSA, a let-them-eat-cake moment like the spike heels she wore when she left the White House to visit the post-Hurricane Harvey, Texas disaster scene.

Her brand was glamour, of the most inaccessible, resting-on-a-pedestal, celluloid kind; her aesthetic, overwhelmingly armored or royal. (She famously wore her coats like a coronation robe, draped elegantly over her shoulders.). Her wardrobe was like a stroll down the stores of Fifth Avenue, from Trump Tower to Saks via Dior, Givenchy, Chanel, Celine, Dolce & Gabbana and Gucci. It was as if the American dream had been redefined as a closet stuffed full of European luxury labels.

But whatever the names inside, the waists were often tightly belted, the suits military, the gowns caped, the hats throwing shade. By the time the Republican National Convention rolled around in August, the images had reached their apogee in the Army-green Alexander McQueen suit Trump wore for her speech, and the fluorescent lime Valentino dress she wore to watch her husband accept his party’s presidential nomination for the second time, trains flying out from each shoulder like wings.

In between there were choices that seemed calculated to disrupt: the white suit Trump wore to the State of the Union in 2018, just after the Stormy Daniels scandal, when such a style had become the uniform of the Trump resistance; the “I really don’t care, do u?” jacket worn on a trip to the southern border that practically broke the internet with a scrawl that seemed like a middle finger to the watching world. But perhaps the final Trump Christmas card was most revealing.

Featuring the first couple in matching tuxedos, it suggested: We’re in this together and always have been. (That’s what Trump’s former best friend Stephanie Winston Wolkoff kept saying, too, after she published a tell-all on her own traumatic experience with the first family.) Even if the conspiracy theorists who thought the portrait had been Photoshopped were right.

Maybe especially if the conspiracy theorists were right.

All the President’s Profiting

Now the Trumps are expected to fall back to Florida, with the gold-plated environs of Mar-a-Lago as their empire in exile. They still have their trademarks, and a potential consumer base clutching their MAGA hats, even as the real estate and hospitality industries begin to publicly distance themselves from the family name, as some financial institutions and major companies disavow the president’s actions, and Donald Trump is shut out of social media. Television and talk radio may be their natural habitats — but then, so is fashion.

This emperor will likely don some new clothes.

The president did cut the ribbon on the Louis Vuitton factory in Texas. Vuitton is owned by LVMH, which now owns Tiffany, which is snuggled up in the shadow of Trump Tower on Fifth Avenue. The group, the largest luxury conglomerate in the world, has not commented on the riots in Washington. Indeed, Shopify aside, the industry is one of the few major business sectors that has remained notably silent on the subject of the president, despite some designers having been so vocal four years ago.

And the Trumps haven’t exactly made a secret of their vision when it comes to product potential.

Remember the libel lawsuit Melania Trump filed in 2017 against the Daily Mail? In the suit, her lawyers argued that an article it published insinuating that her modeling career had involved more than just posing had endangered her potential to “launch a broad-based commercial line in multiple product categories,” thanks to her position as “one of the most photographed women in the world.” (The allegations were retracted, an apology was issued, and a settlement was made.)

At the time, her office said she had no such plans to use her “position for profit.” But when she is no longer in that position, it’s not hard to imagine the potential (particularly for someone who once upon a time had a QVC jewelry line). After all, some of the categories the lawsuit mentioned include “apparel, accessories, shoes, jewelry, cosmetics, hair care, skin care and fragrance.” A coffee-table book is apparently already being considered, the better to memorialize (and monetize) her style.

Ivanka Trump, of course, has her own history with fashion, having effectively begun her time as her father’s surrogate while doubling as her company’s own best model in ladder-climbing sheath dresses, statement bangles, and Cinderella court shoes. Her business may have been dissolved after the blowback about her using her position for profit — not to mention her let-them-eat-cake evening gown Instagram shots — but it could easily return.

Meantime, her increasingly unshaven brothers have also increasingly positioned themselves as the avatars of the hunter-gatherer set.

The Trumps may be leaving the White House, but their personal brands will live on, even with the shine tarnished, the substance beneath revealed as fool’s gold. It is up to us whether we buy them.