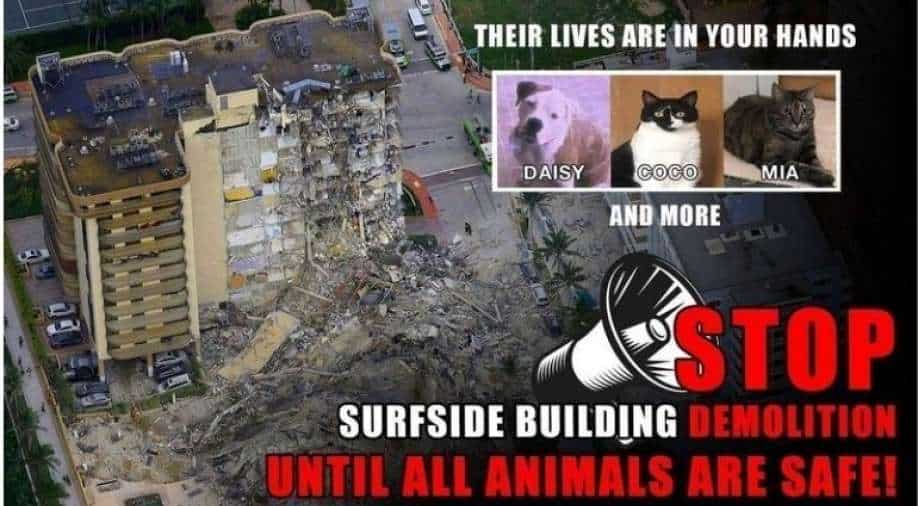 So far, rescuers have recovered the remains of 24 people, with 121 still missing after the Florida building collapsed

As the remaining parts of a partially collapsed apartment building in Florida were demolished using explosives, animal rights activists are unhappy with the decision.

Animal rights activists have raised their voices against the ignorance of authorities towards animals stuck in the building.

Several people came together to sign a petition urging local authorities to conduct a search and rescue mission for pets and other animals stuck in that building before demolishing the structure.

"When the evacuation was over many animals had been left behind and are still in the building. Now there are plans to demolish the building with the trapped animals still inside," the petition’s description read.

"Families lost so much, they need their pet companions. Helping people cope is so important at the moment. I hope authorities allow them to be reunited as soon as possible," it added.

However, the demolition took place without any rescue mission for animals. Although the petition has now been closed, the moderator has assured the fellow activists that the "pet guardians wont be silenced''.

"There is no proof of any animal searching had been done. This is a crime!!!," the moderator said. "Many people didn’t know the name of the Miami Dade Mayor Daniella Levine Cava, now we won’t forget."

The demolition was hurried as the Tropical Storm Elsa is rumbling northward through the Caribbean.