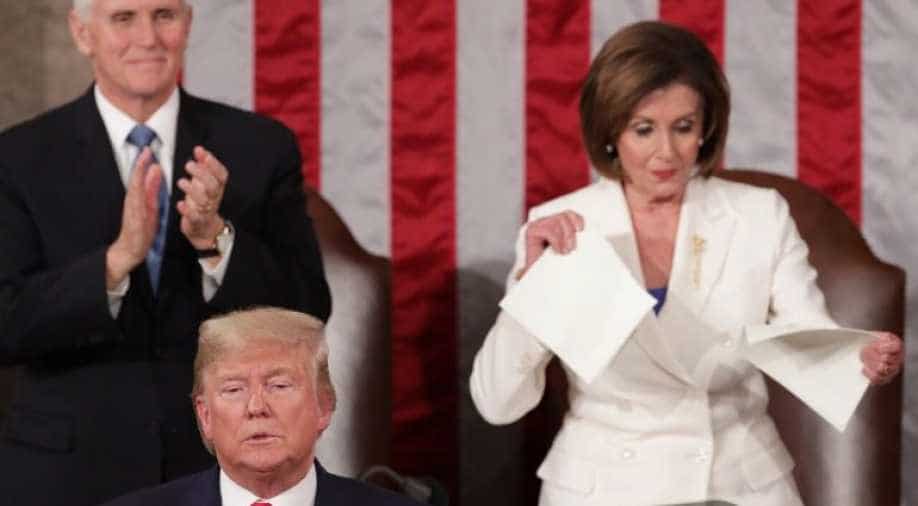 The US president spoke for an hour and 18 minutes

Trump appeared to have rejected a handshake from the speaker, which was followed by the Speaker tearing up the speech.

.@SpeakerPelosi tears up of State of the Union speech.#SOTU #SOTU2020 pic.twitter.com/sIpi4G7KsL

Interestingly, there was no mention of the impeachment saga in his speech. Pelosi and Trump have exchanged jibes at multiple occasions, especially since Trump was impeached in the House, with Pelosi at the helm of the process. Since then, both have openly criticised each other.

One of our last surviving Tuskegee Airmen.

The survival of a child born at 21 weeks.

The mourning families of Rocky Jones and Kayla Mueller.

A service member's reunion with his family.

The impeachment case is set to be put forth to the Senate tomorrow. An acquittal is expected, considering the Senate has a majority of the Republicans who are expected to vote in his favour. 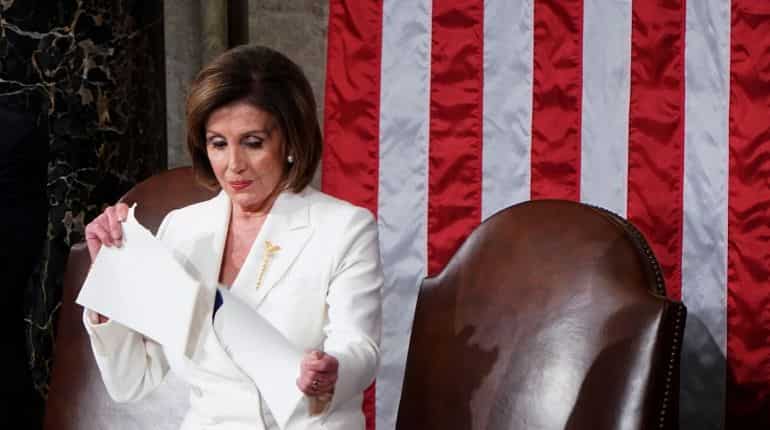 Trump had earlier claimed that he was not ''bitter'' from the impeachment hearings and wanted the speech to be ''low-key''.

The speech witnessed many Democrats walking out.

Also read: EXPLAINED: What is the State of the Union address

The US president spoke for an hour and 18 minutes, and was seen walking out while receiving compliments from Republican lawmakers.

As the address continues, Democrats Gretchen Whitmer and Veronica Escobar are expected to deliver a response to the speech.

Watch the moment a military husband surprises his wife and two kids at the State of the Union.

"I am thrilled to inform you that your husband is back," Pres. Trump says, "he is here with us tonight, and we couldn't keep him waiting any longer." https://t.co/z21h5Ddt05 pic.twitter.com/YX5f7P8fNw

In a key moment, Trump reunited a military family and said ''I am thrilled to inform you that your husband is back''. They were separated for over seven months due to the father's deployment.

Cheers of ''Four more years!'' echoed the halls of the House, setting the tone for the rest of the address.

Also read: Our borders are secure, our values are renewed and pride restored: Trump in State of the Union address

"Our borders are secure, our values are renewed and pride restored," Trump said.

"Since my election, we have created seven million new jobs," he told the US house.

"Three years ago, we launched the great American comeback. Tonight, I stand before you to share the incredible results," he said.

Traditionally, the Speaker says: "Members of Congress, I have the high privilege and distinct honor of presenting to you the President of the United States."

Speaker Pelosi said "Members of Congress, the President of the United States."

As is customary, the Speaker is expected to introduce the president with references to honorary titles. Pelosi broke away from the practice and simply introduced Trump as the President.