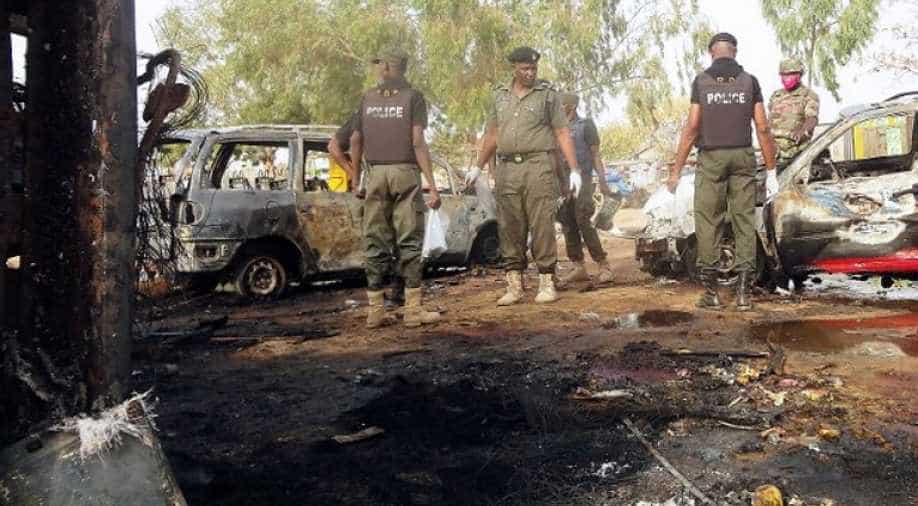 Forty-five people were killed on Friday when two female suicide bombers detonated their explosives in a busy market in northeast Nigeria, the military said.

The emergency service said that 33 people have been injured.

Several people have been injured in the attack," said Akintoye on the phone from a military base in the town of Mubi, 100 kilometres (60 miles) away.

A local government official and the National Emergency Management Agency (NEMA) confirmed the attack, the latest in Boko Haram's seven-year insurgent campaign in the restive region.

"The two bombers who (were) disguised as customers, detonated their suicide belts at the section of the market selling grains and second-hand clothing," said Yusuf Muhammad, the chairman of Madagali local government.

"We still don't have the exact number of those injured but they are many," he added.

Ibrahim Abdulkadir, NEMA spokesman for the northeast, said rescuers had been deployed to the scene.

"We heard there was a twin-blast in a market at Madagali this morning. Our men are on (the) ground evacuating the victims," he told AFP. "We still don't have details of casualties."

He said security agents had cordoned off the scene of the explosions.

Madagali was among the territory captured by Boko Haram in 2014 before Nigerian troops, supported by a regional force, liberated it in 2015.

Friday's incident was the third in the town since two female suicide bombers attacked in December last year, killing and injuring scores.

Boko Haram is seeking to impose a hardline Islamic legal system on Nigeria's mainly-Muslim north. Its campaign of violence has killed at least 20,000 people and displaced some 2.6 million since 2009.

Nigeria's military campaign against the jihadists is increasingly bogged down as it confronts suicide attacks, looting and indiscriminate slaughter.

The United Nations has warned that the affected region faces the "largest crisis in Africa".

The UN estimates that 14 million people will need outside help in 2017 because of the ongoing violence, particularly in Borno State, the epicentre of the rebellion.