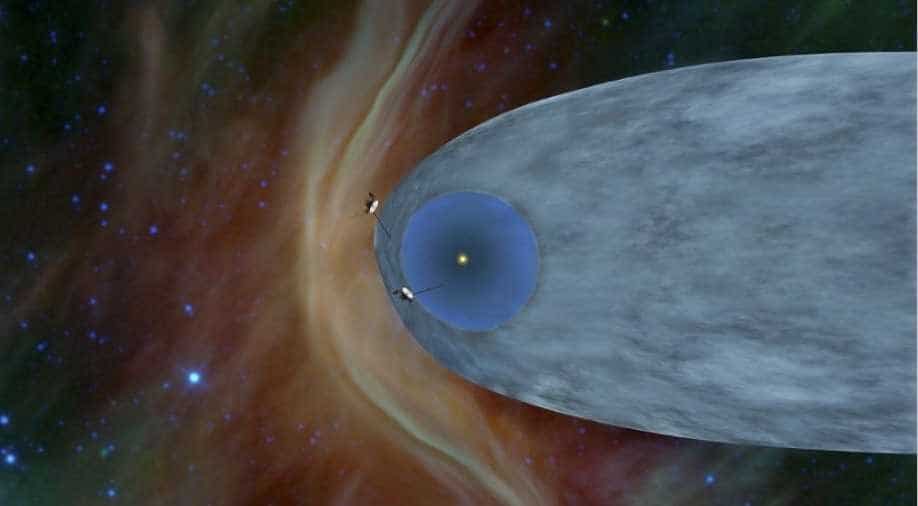 Voyager 2 left Earth's orbit in 1977 a month before its twin Voyager 1, but took seven years longer to reach the heliosphere's outer limit some 18 billion kilometres (more than 11 billion miles) away.

A probe launched by NASA four days after Elvis died has delivered a treasure trove of data from beyond the "solar bubble" that envelops Earth and our neighbouring planets, scientists reported Monday.

But for every mystery Voyager 2 has solved about the solar winds, magnetic fields and cosmic rays that buffet the boundary between interstellar space and the Sun's sphere of influence, a new one has cropped up.

Voyager 2 left Earth's orbit in 1977 a month before its twin Voyager 1, but took seven years longer to reach the heliosphere's outer limit some 18 billion kilometres (more than 11 billion miles) away.

Shaped something like a windsock in a stiff breeze, the heliosphere is formed by the Sun's magnetic field and solar winds that can reach speeds of three million kilometres per hour.

It can be compared to a cosmic supertanker ploughing through space, said Edward Stone, a professor at the California Institute of Technology and lead author of one of five articles published in Nature Astronomy.

"As it moves through the interstellar medium" -- the vast expanses of space between stellar fiefdoms -- "there's a wave in front, just as with the bow of a ship," Stone told journalists by phone.

Scientists hoped to answer a number of questions by comparing data sent back by the two probes, which pierced the Sun's protective bubble at different angles and locations.

"We didn't have any good quantitative data of how big this bubble is that the Sun creates around itself with supersonic solar wind and ionised plasma speeding away in all directions," Stone said.

Voyager 2 confirmed, for example, the existence of a "magnetic barrier" at the outer edge of the heliosphere that had been predicted by theory and observed by Voyager 1.

"But contrary to all expectations and predictions, the magnetic field direction did not change when Voyager 2 crossed the heliopause," Leonard Burlaga, a scientist at the NASA Goddard Space Flight Center and lead researcher for one of the studies, told AFP.

The so-called heliopause is the relatively thin contact boundary where solar wind of charged particles and interstellar wind collide.

Scientists were also surprised that it took 80 days for Voyager 2 to cross this magnetic barrier, while its sister probe did so in less than a day.

And then there's the leakage enigma.

As Voyager 1 crossed the heliosphere threshold, it detected particles from outer space -- notably cosmic rays -- racing the other way.

"On Voyager 2, it was just the opposite," said Stone. "Once we left the heliosphere, we continued to see particles leaking from the inside out."

In at least one case, it was a similarity between the two missions that was perplexing.

"This is very strange," said Tom Krimigis, a scientist in the Applied Physics Laboratory at Johns Hopkins University and senior author of a study reporting on measurements of charged particles.

"One crossing (of the heliopause) occurred at the solar minimum when solar activity is the least, and the other at the solar maximum," he told journalists.

"If we take our models at face value, we expect that there would be a bigger difference."

The Sun's activity waxes and wanes in 11-year cycles.

The missions also measured incoming cosmic rays that grew stronger as the probes approached heliopause, with direct implications for the health of manned space missions into deep space.

"If an astronaut moves closer to the source [of cosmic rays], it is going to be important to understand how much intensity there is," Stone said.

"A factor of three is big when we're talking about the effect of radiation on life."

After 42 years in action, they are still going strong, although both will run out of power and fall silent within five years.

But that does not mean they will disappear, said Bill Kurth, a researcher at the University of Iowa and co-author of the study focusing on plasma waves.

"They will outlast Earth," he said. "They are in their own orbits around the galaxy for five billion years or longer, and the probability of them running into anything is almost zero."

If intelligent life in a far corner of the Milky Way finds either probe one day, a "golden record" including drawing of a naked man and woman, bird and whale songs, and "Johnny B. Goode" by Chuck Berry will be on board.