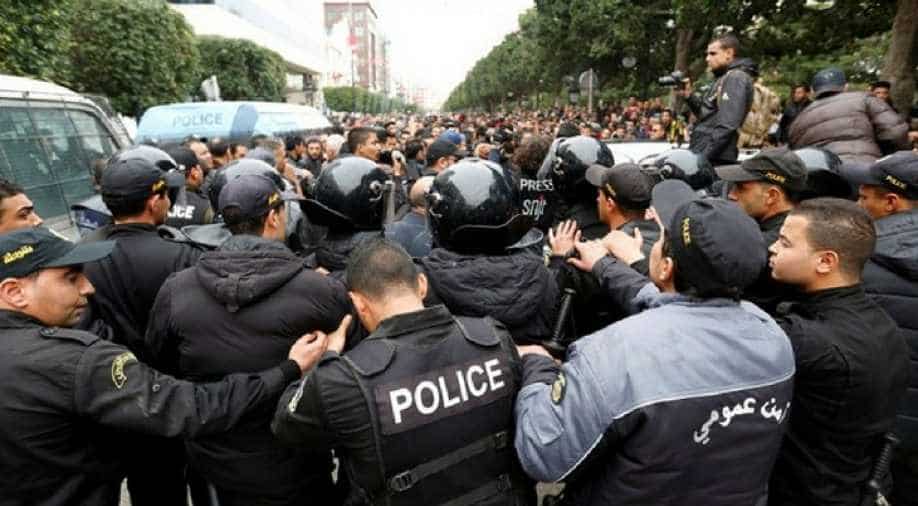 Tunisia has seen rising anger over hikes in value-added tax and social contributions after a tough new budget was applied at the start of the year. Photograph:( Reuters )

More than 200 people have been arrested and dozens of police hurt during clashes in Tunisia, the interior ministry said Wednesday, as anger over austerity measures spilt over into unrest.

The North African country has been hailed for its relatively smooth democratic transition since a 2011 revolt that sparked the Arab Spring uprisings, but seven years after the revolution, tensions over economic grievances are high.

Tunisia has seen rising anger over hikes in value-added tax and social contributions after a tough new budget was applied at the start of the year.

Interior ministry spokesman Khalifa Chibani told local radio that 49 police officers were wounded during the second night of clashes across the country Tuesday to Wednesday and that 206 "troublemakers" were arrested.

Properties were damaged, he said, including a branch of the Carrefour supermarket chain in a suburb of Tunis that was looted.

After a calm day on Wednesday, residents said demonstrators in the evening took to the streets of Tebourba, a town west of the capital Tunis where a man in his 40s died in unrest Monday night.

On a visit to a nearby town, Prime Minister Youssef Chahed condemned acts of "vandalism" that "serve the interests of corrupt networks to weaken the state", pointing the finger at a leftist party that called for protests.

There were similar scenes in Kasserine, a town in Tunisia's neglected central region, with protesters burning tires to block roads and some throwing stones at police.

The army has been deployed around banks, post offices and other government buildings in the country's main cities, the defence ministry said.

There have been no figures given for the number of protesters injured in the clashes.

On Tuesday night, hundreds of young people took to the streets of Tebourba for the funeral of the man who died.

Police have insisted they did not kill him. Health Minister Imed Hammami said that results of an autopsy would be made public on Thursday.

Unrest was also reported in the working-class neighbourhoods of Djebel Lahmer and Zahrouni on the outskirts of Tunis, the central cities of Gafsa and Kasserine, and the northern town of Jedaida.

In the central town of Sidi Bouzid, the cradle of the protests that sparked the 2011 uprisings, youths blocked roads and hurled stones, and the police retaliated with tear gas, an AFP reporter said.

A representative of Tunisia's Jewish community said two Molotov cocktails were thrown at the entrance to two Talmudic schools on the Mediterranean island of Djerba, but their interiors were not damaged.

The recent unrest started with peaceful protests against the austerity measures last week but escalated into clashes with police in the night of Monday to Tuesday.

Activists have called for a massive demonstration on Friday against the austerity measures, which are expected to increase the cost of living.

They have demanded a revision of the legislation behind the VAT and social contribution hikes, as well as better welfare for struggling families.

"There are acts of looting and robbery but also a political message from a section of the population that has nothing to lose and feels ignored" seven years after a revolution demanding work and dignity, said political scientist Selim Kharrat.

He said that many public buildings have been targeted while the government has "taken a pretty strong stance against the protesters".

Tunisia's economy has struggled since the 2011 revolution, which was fuelled by unemployment and graft.

Protests are common in the North African state in the month of January, when Tunisians mark the anniversary of the revolt that unseated dictator Zine El Abidine Ben Ali.

January 2016 saw the biggest wave of public discontent since the uprising as the death of an unemployed protester in Kasserine sparked days of unrest.

In December, unemployed protesters and activists marched through the streets of Sidi Bouzid, angry over the lack of jobs and opportunities that continue to plague residents.

While politicians had so far resisted the urge to backtrack on reforms, ICG said: "in the context of an economic slump, the nostalgia for a strong state, like the one that the former regime claimed to defend, is spreading".

The revolution in Tunisia began in December 2010 after street vendor Mohamed Bouazizi set himself on fire and later died in a protest over unemployment and police harassment that spiralled into Ben Ali's overthrow.