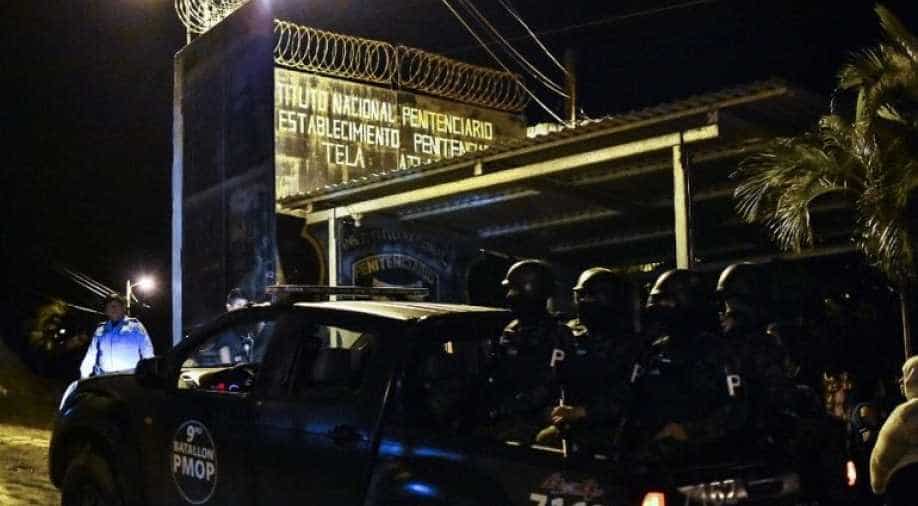 Members of the Honduras's Police Military arrive to the penitentiary of Tela Photograph:( AFP )

Fusine, the combined national security force had found arms and ammunition in the prison, including 9-millimetre guns

Clashes ensued among prisoners in Honduras, killing 18 inmates and injuring 16.

According to prison officials, the fighting erupted at a jail in the town of Tela.

The prison is 200 kilometres from the country's capital, Tegucigalpa. Until now, no trigger or cause has been ascertained.

Fusine, the combined national security force had found arms and ammunition in the prison, including 9-millimetre guns.

Earlier, only three deaths were reported, with the toll quickly rising. By Saturday, 14 dead and 15 wounded were identified by the authorities.

Digna Aguilar, a prison spokesperson said that authorities had to enter the area carefully "for fear of being among the victims" because several inmates carried firearms, which slowed the investigation.

Honduran President Juan Orlando Hernandez, grappling with a recent wave of prison killings, had ordered the army and the police on Tuesday to take full control of the country's 27 prisons, which are badly overcrowded with some 21,000 inmates.

But as of Friday, the military had yet to take complete control of the Tela detention centre, according to Aguilar.

Hernandez was triggered to announce the scheme amid recent violence in prisons.
On December 14 of five members of feared gang Mara Salvatrucha (MS-13) by a fellow detainee at the high-security prison in La Tolva, 25 miles east of Tegucigalpa.

A day earlier. Pedro Idelfonso Armas, the warden of El Pozo, the country's main high-security prison, in the western city of Santa Barbara, was shot dead in the south of the country.

Honduras has been trying to deal with drug trafficking, gangs, poverty and corruption.

It suffers from one of the highest homicide rates in the world outside areas of armed conflict, having registered 41.2 homicides per 100,000 inhabitants in 2018.

Described by the local media as ''gang violence'', the tussle led to 17 deaths in the facility and one in the hospital.