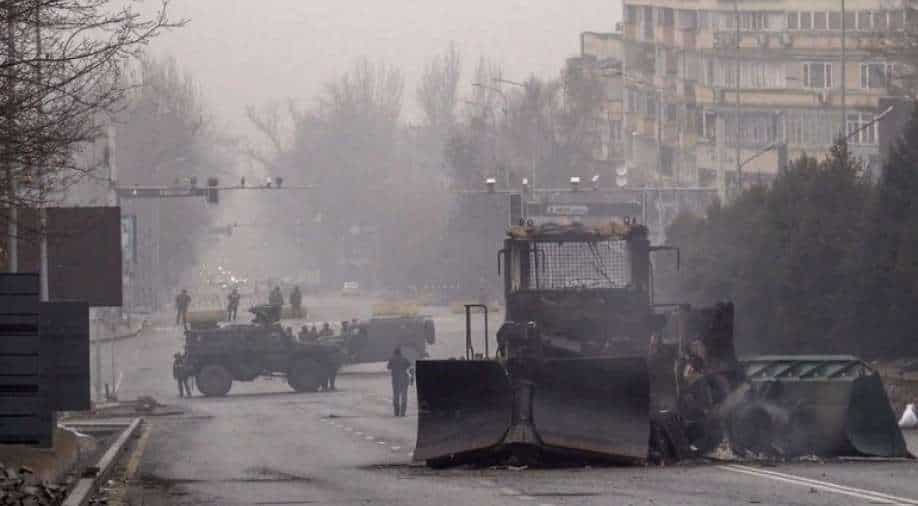 Servicemen and their military vehicles block a street in central Almaty after violence that erupted following protests over hikes in fuel prices Photograph:( AFP )

Previously, officials had said 26 protesters and 16 security officers in the unrest that erupted over fuel hikes and escalated into clashes with law enforcement

Local media in Kazakhstan reported on Sunday that at least 164 people have died in the wake of violent protests this week.

Previously, officials had said 26 protesters and 16 security officers had been killed in the unrest that erupted over fuel hikes and escalated into clashes with law enforcement.

The Interior Ministry said more than 4,400 people have been arrested. The protests spread to the country’s largest city, Almaty, where demonstrators seized and burned government buildings.

The former head of Kazakhstan’s counterintelligence and anti-terror agency has been arrested on charges of attempted government overthrow.

The arrest of Karim Masimov was announced by the National Security Committee, which Masimov headed until he was removed this week by President Kassym-Jomart Tokayev.

A number of "strategic facilities" in Kazakhstan are under the guard of a Russia-led military alliance invited to restore order, the presidential office said.

At Tokayev's invitation, the Russia-led Collective Security Treaty Organisation (CSTO) sent troops to restore order, an intervention that comes at a time of high tension in Russia-US relations ahead of new talks on the Ukraine crisis.

"A number of strategic facilities have been transferred under the protection of the united peacekeeping contingent of the CSTO member states," the presidential office said in a statement detailing a security briefing chaired by Tokayev.

"The situation has been stabilised in all regions of the country," it said, adding law enforcement agencies had seized back control of administrative buildings and vital services were being restored.

The demonstrations in Kazakhstan began as a response to Tokayev replacing the president of the resource-rich former Soviet republic, Nursultan Nazarbayev.

The protests in the Central Asian nation were the most widespread since Kazakhstan’s independence from the Soviet Union in 1991.