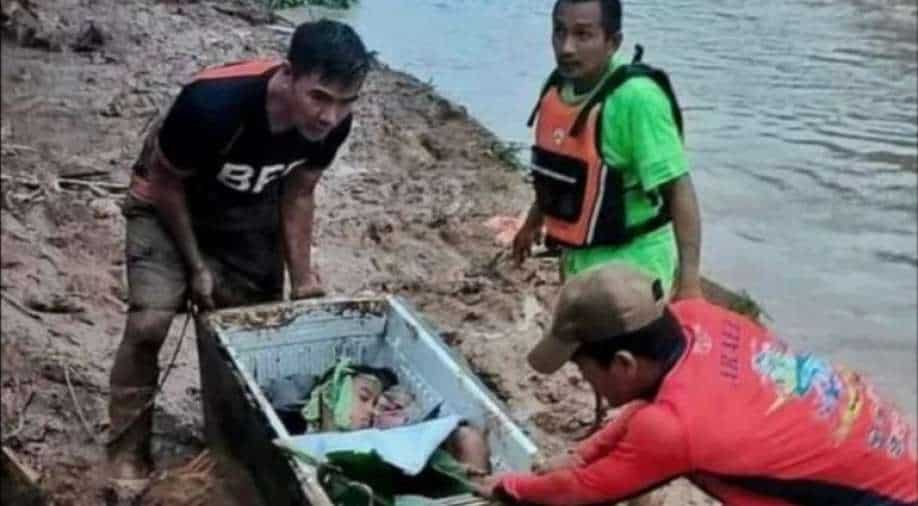 As Jasme saw the mudslide approach, the 11-year-old jumped into the family refrigerator. He then hunkered down inside the appliance for nearly 20 hours to protect himself from the storm. (Image courtesy: baybay fire) Photograph:( Facebook )

An 11-year-old boy named CJ Jasme miraculously escaped an extremely dangerous landslide in the Baybay area of the Philippines by staying in a refrigerator for a whole day.

A video went viral of his unusual life preserver when the authorities found him, and called it nothing less than a miracle, as reported by the New York Post.

Jasme was with his family when the landslide struck, generated by the tropical storm Megi, which led to the deaths of hundreds of people. As Jasme saw the mudslide approach, the 11-year-old jumped into the family refrigerator.

He then hunkered down inside the appliance for nearly 20 hours to protect himself from the storm. The moment authorities found the refrigerator, they immediately sent out an SOS because another landslide was approaching.

The boy, who was thankfully awake, just suffered a broken leg as a result of this event. He was first given the required assistance and then underwent surgery to repair his broken leg.

As per the authorities, the boy is currently in stable condition, though his family was unlucky as his mother and younger siblings are still missing, and his father died in another landslide the day before his house was destroyed.

His older sibling is thought to have missed this incident.

Police officer Jonas Etis stated that the boy was rescued by the rescue crew and was then carried on stretcher after dragging the broken appliance out of the dirt like a coffin. The boy’s first word was ‘I’m hungry,’ reported New York Post.

Furthermore, the storm has resulted in nearly 200 local residents being hurt and 172 people being dead in the Baybay area alone. The search for those who have gone missing is still ongoing.