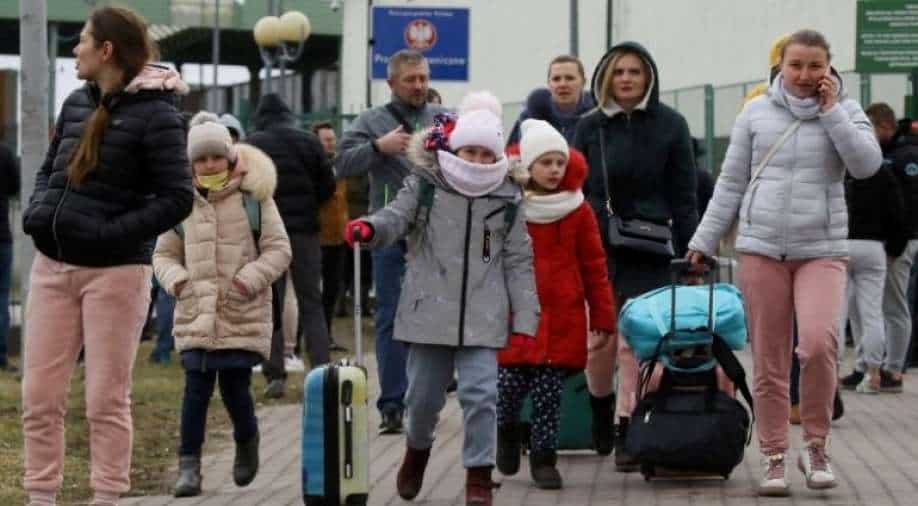 People arrive at the border crossing between Poland and Ukraine, after Russia launched a massive military operation against Ukraine, in Medyka, Poland Photograph:( Reuters )

Those arriving were mostly women, children, and the elderly after Ukraine’s President Volodymyr Zelenskyy on Thursday banned men of military age from leaving the country

Polish Deputy Interior Minister Pawel Szefernaker on Saturday said 100,000 people have crossed the border into Poland from Ukraine since Russia's invasion this week.

"From the onset of warfare in Ukraine through today, along the entire border with Ukraine, 100,000 people have crossed the border from Ukraine into Poland," Szefernaker told reporters in the border village of Medyka, southeastern Poland.

Those arriving were mostly women, children, and the elderly after Ukraine’s President Volodymyr Zelenskyy on Thursday banned men of military age from leaving the country.

More than 50,000 Ukrainian refugees have fled their country in less than 48 hours, the UN High Commissioner for Refugees, Filippo Grandi, said Friday, as many more continued to move towards the borders. He said a majority went to Poland and Moldova.

Cars were backed up for several kilometers (miles) at some border crossings as authorities in Poland, Slovakia, Hungary, Romania and Moldova mobilised to receive them, providing shelter, food and legal help. These countries also eased their usual border procedures, among them COVID-19 testing requirements.

At border crossings in Poland, Ukrainians arrived on foot and by car and train — some with their pets — and were greeted by Polish authorities and volunteers offering them food and hot drinks.

Some sought to join relatives who have already settled in Poland and other EU nations, whose strong economies have for many years attracted Ukrainian workers.

For many the first stop was the train station in Przemysl, a city in southeastern Poland that is a transit point for many. Ukrainians slept on cots and in chairs as they awaited their next moves, relieved to escape the shelling of Kyiv and other places.

European Union member Poland, which has the region's largest Ukrainian community of about 1 million people, has seen a throng of refugees at its borders since the Russian invasion began.