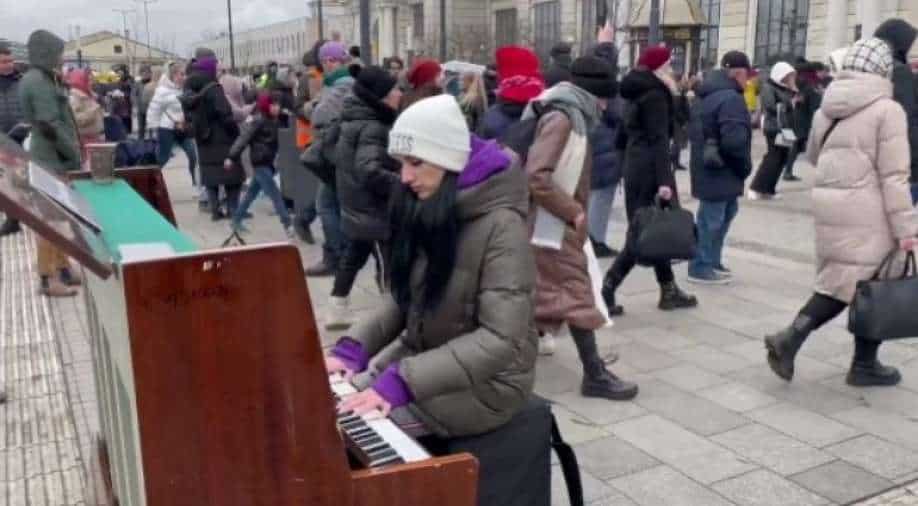 In this image, an accomplished pianist can be seen playing outside Lviv station, which is thronging with exhausted refugees fleeing war in eastern Ukraine. Photograph:( Twitter )

The main western city of Lviv has become a hub for foreign diplomatic missions, journalists, and Ukrainians seeking safety or seeking to leave the country

A video of an accomplished pianist playing Louis Armstrong's song “What a Wonderful World” outside Lviv station has gone viral on social media.

Thousands of people fleeing the Russian invasion of Ukraine are waiting for hours outside the railway station at the western city of Lviv to board trains heading to Poland.

Lviv, some 60 kilometers (40 miles) from the Polish border, has become a transit point for families fleeing fighting in eastern, southern and central Ukraine.

Armstrong had written the song as a piece that might quell some of the racial and political unrest in America, given its optimism and celebration of life.

Outside Lviv station, which is thronging with exhausted refugees fleeing war in eastern Ukraine, an accomplished pianist is playing “What a Wonderful World.” It’s hauntingly beautiful. pic.twitter.com/Xm5itr8jl7

Lviv, a city of trams and cobblestone streets, has become a staging area for humanitarian aid and soldiers pouring back into Ukraine's war zone.

Several Western embassies had already transferred their activities to Lviv, moving out of Kyiv in the run-up to the war.

The authorities have organised free trains to take people across Ukraine towards several EU countries. The scenes at Lviv station are chaotic and the trains are packed.

Haggard-looking travellers scan the timetables, dragging suitcases and prams from one end of the station to the other. Police and military patrols are a constant presence. Volunteers in bright yellow vests hand out free tea and biscuits.

Also read | What are Czech hedgehogs?: Homemade obstacles that can destroy Russian tanks

Volunteers in the Ukrainian city of Lviv have been setting up shelters fearing Russian forces may advance sooner or later to the western part of the country.

A group of men in Lviv are also helping the war effort against Russian invaders by producing home-made anti-tank obstacles called "Czech hedgehog" from tutorials found on the internet.

Thousands are thought to have died or been wounded as the biggest attack on a European state since World War Two unfolds, creating 1 million refugees according to the United Nations.