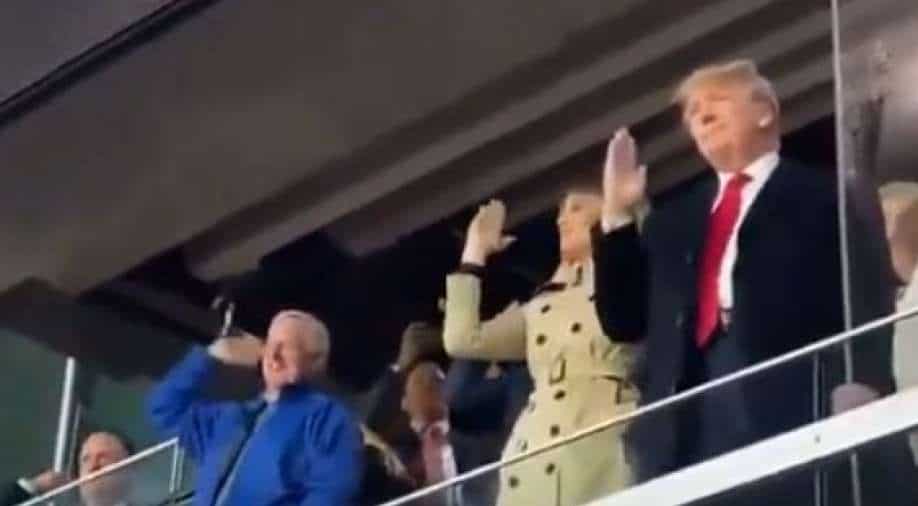 Former US President Donald Trump while attending the baseball world series performed the controversial "Tomahawk chop" cheer which is considered a racist gesture by native Americans.

Trump was attending a match between Atlanta Braves and  Houston Astros at the Truist Park in Atlanta.

National Congress of American Indians(NCAI) president Fawn Sharp denounced the gesture saying: "We have repeatedly and unequivocally made our position clear - native people are not mascots, and degrading rituals like the ‘Tomahawk chop’ that dehumanise and harm us have no place in American society."

NCAI reiterates its longstanding opposition to the Atlanta @Braves' mascot and “tomahawk chop” fan ritual as the team plays in the @MLB #WorldSeries.

The NCAI chief called teams to follow the "example set by the Cleveland Guardians". The US major league team had decided to retire its name “Indians” and mascot.

However, Major League Baseball(MLB) commissioner Rob Manfred had said that native Americans in Atlanta were "fully supportive of the Braves' programme, including the chop."

"For me, that's kind of the end of the story. In that market, we're taking into account the native American community," Manfred added.

Trump's gesture was criticised on social media as the US president's latest controversial gesture upset many people.

Do you suppose there's any chance in the world that Atlanta Braves fans realize how ridiculous they look to the entire rest of the planet with their idiotic Tomahawk Chop? pic.twitter.com/L9iAsjnjPT

It's important, especially for those whose opinions on the matter are deeply ingrained and think any discussion of the tomahawk chop is disingenuous, to understand the mistreatment of indigenous people in Georgia and why the chop is so bothersome to many. So, a history lesson.

Trump's wife Melania was seated next to him and sought to join him. The Braves fans also joined Trump in carrying out the offensive celebration which has been repeatedly criticised by native Americans.

The former president had earlier thanked Manfred for the invite while adding that he and Melania were looking forward to the game. Republican Senate candidate Herschel Walker was also at the game.