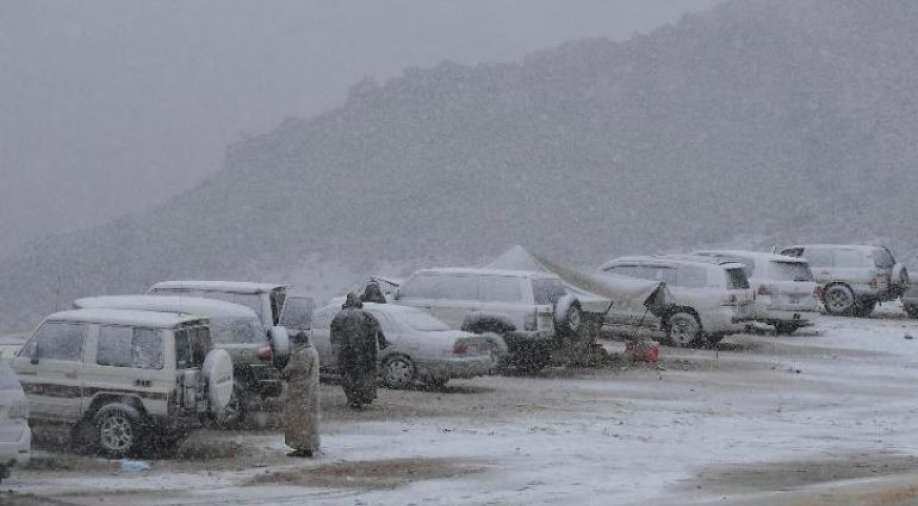 In this picture, people can be seen enjoying the snowfall in Saudi Arabia's Tabuk region Photograph:( Twitter )

Snow is expected to cover areas of altitudes as low as 400 meters, according to the meteorological department

Social media users in Saudi Arabia have shared videos of a rare snowfall in the Tabuk region after a huge drop in temperature overnight.

Snow is expected to cover areas of altitudes as low as 400 meters, according to the meteorological department.

Snow blanketed parts of the country on Wednesday, covering areas it has not reached in years, disrupting traffic and postponing vaccination campaigns against COVID-19 and even exams at some universities.

Tourists thronged to the peak of Jabal Al Lawz which is completely covered in white. It is located near the Jordanian border in the Tabuk region.

The harsh weather forced security personnel to restrict the road leading to the region.

#Snow Tabuk weather, if you plan today to visit Tabuk cancel your plan . It is expected that the roads will be closed due to traffic congestion ! pic.twitter.com/MUbben7ijk

Amid low visibility, Saudi Arabia’s Civil Defence has called on everyone “to be vigilant.” It has anticipated the likelihood of severe rain and thunder in the next 24 hours.

In 2018, the country had experienced a similar snowfall in which people had organised snow sports such as sleigh rides and snowball battles.