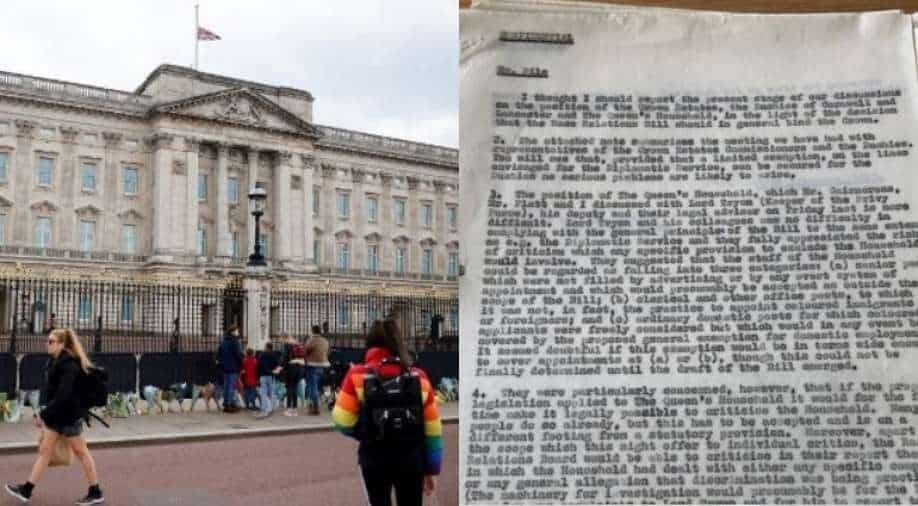 Some of these controversial clauses remain to date, like the one exempting the Queen and her household from laws that prevent race and sex discrimination

Reigniting the debate over the British royal family and race, newly discovered documents, tell how until at least the 1960’s “coloured immigrants or foreigners” were banned from serving in clerical roles in the royal household.

Another major revelation done by these documents shed light on how controversial clauses are negotiated by Buckingham palace. Some of these controversial clauses remain to date, like the one exempting the Queen and her household out of the purview of laws that prevent race and sex discrimination.

Also Read | Explained: Royal mess - all the controversies that British Monarchy has faced till date

These papers discovered at the National Archives as part of an ongoing investigation by the Guardian.

The papers reveal how in 1968, the then Queen’s chief financial manager informed civil servants that, although they were permitted to work as domestic servants “it was not, in fact, the practice to appoint coloured immigrants or foreigners” to clerical roles in the royal household.

It is still unclear when the practice ended, as Buckingham Palace has refused to answer questions about the ban and when it was revoked. Instead, Buckingham palace claims that before the 1990s they didn’t keep records of their employees’ racial backgrounds. Palace records from the 1990s show that people from ethnic minority backgrounds were employed at the palace in that decade.

While laws seeking to make illegal any discrimination on the grounds of race or ethnicity while hiring an employee, were sought to be introduced by government ministers in the 1960s, the queen has remained personally exempted from the equality laws for more than four decades.

An exemption that has made it impossible for royal household employees that are women or people from ethnic minorities to complain to the courts if they believe they have been discriminated against.

Buckingham Palace in a statement chose not to dispute the Queen’s exemption from the laws but rather added that it had a separate process for hearing complaints related to discrimination.  The palace however did not specify what this process consists of.

The newly discovered documents are likely to refocus attention on the royal family’s historical and current relationship with race, especially given what Meghan Markle, the Duchess of Sussex, the family’s first mixed-race member had to say in regard to her own ethnicity and those of her children.

Also Read | Meghan Markle's father dismisses her racist allegation against the royal family: The whole thing about colour is bulls**t

The exemption was brought into force in the 1970s when a series of racial and sexual equality laws to eradicate discrimination were implemented. A revelation that the documents make is regarding how government officials had to coordinate with Queen Elizabeth Windsor’s advisers on the wording of the laws.

Some of the uncovered documents are concerned with the use of Queen’s consent, an obscure parliamentary mechanism using which the British monarch grants parliament permission to debate laws that affect her.

Also Read | What is the actual cost of sustaining Europe's royal families?

While the documents shed light on the monarch’s manipulation of the parliamentary proceedings, Buckingham Palace says the process is a mere formality. This denial is in spite of compelling evidence that the Queen has repeatedly used this power to secretly lobby ministers to amend legislation that was not to her liking.

The documents reveal how this Queen’s consent procedure was used covertly to influence the formation of the draft race relations legislation.

In 1968, Callaghan wanted to expand the UK’s racial discrimination laws from the mere prohibition of discrimination in public places to encompassing racism in employment or services like housing. But the then home secretary, James Callaghan, and other civil servants appear to be under the impression that until the Queen’s advisers are sufficiently satisfied that the race relations bill cannot be used against her in court, they should not request Queen’s consent for parliament to debate the bill.

As a result of the exemption given to the Queen, the Race Relations Board that was given the task of investigating racial discrimination had to send any complaints from the Queen’s staff to the home secretary rather than the courts.

In the 1970s, three laws were brought in to counter racial and sexual discrimination in the workplace. While complainants, in general, were empowered to take their cases directly to the courts, staff in the royal household were specifically prevented from doing so. The wording of the ban was just vague enough to make sure that the public may not have even realised that their monarch’s staff has been exempted.

A Buckingham Palace spokesperson said: “The royal household and the sovereign comply with the provisions of the Equality Act, in principle and in practice. This is reflected in the diversity, inclusion and dignity at work policies, procedures and practices within the royal household.

India: An electric scooter saves the day during Navratri celebrations. Here's how