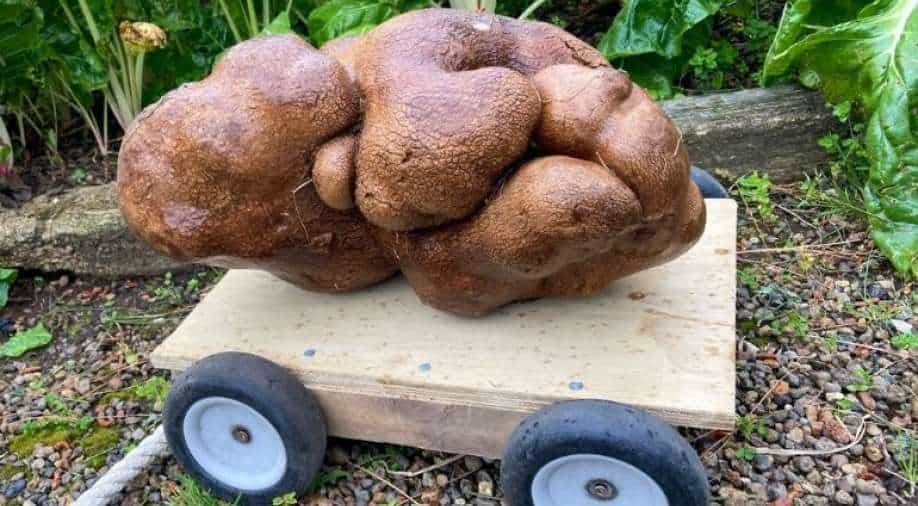 Colin and Donna Craig-Brown were digging their garden when they discovered the 'ugly' potato that weighed a remarkable 7.9 kgs or 17.4 pounds

A couple living in New Zealand have discovered a massive potato that resembles a mutant and could be the world's largest.

Colin and Donna Craig-Brown were digging their garden when they discovered the 'ugly' potato that weighed a remarkable 7.9 kgs or 17.4 pounds.

At first, they thought that it was some kind of strange fungal growth or a giant puffball but realised it was a potato when they tasted it.

Also read | Sumomomomomomomomo: Horse with this exact name has won a race in Japan

The duo even had to build a small cart to tow around Doug, which is quite possibly the largest potato on record.

It has become something of a celebrity around their small farm near Hamilton.

''We put a hat on him. We put him on Facebook, taking him for a walk, giving him some sunshine,” Colin said. “It’s all a bit of fun. It’s amazing what entertains people.''

People started asking the couple for secret gardening tips. They advised people to be spontaneous throw a bunch of cow manure and straw and see what happens

The current Guinness World Record for the world's largest potato is held by a monster from the UK that weighs below 5 kg. It won the record in 2011.

However, Doug the potato has started smelling badly as per Colin who says the reason behind it is a mystery to him.

He has cleaned the potato and put it in the freezer so that it doesn't spoil.

Colin, who is an amateur brewer, wants to turn Doug into a nice drop of potato vodka.