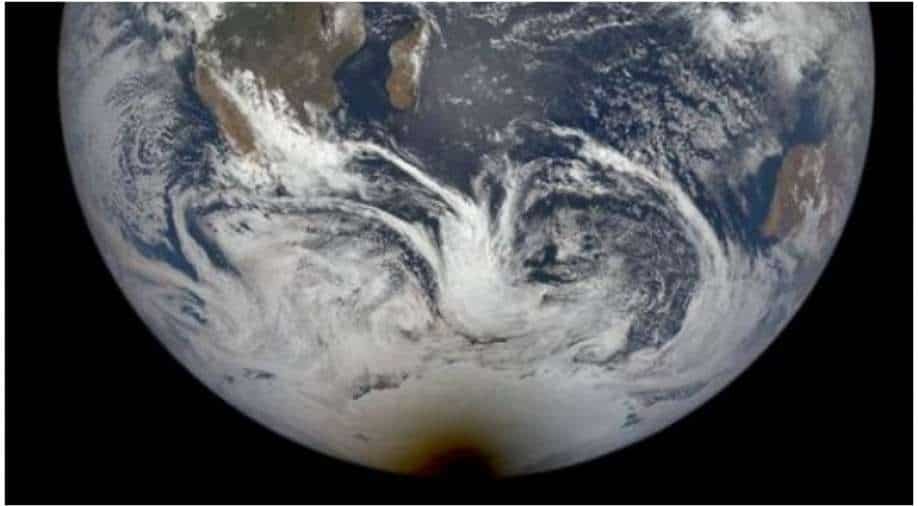 (Photo: NASA) The image of a solar eclipse taken by NASA's Deep Space Climate Observatory. Shadow of Moon can be seen over Antarctica in the south Photograph:( Instagram )

Watching solar eclipse from Earth is such a passe. Now watch what happens from space courtesy NASA

Solar eclipse is a treat to the senses. It's amazing to see a day give way to a sudden night and the ever-shining disc of the Sun getting obscured by the Moon. Those observing can see stars twinkling right in front of them in a black sky which, by logic, should have been lit by bright sunshine.

But not everyone is lucky to have seen a total eclipse. You have to be in the right place at the right time to witness this natural wonder. There may be thousand who wouldn't have seen total, or even a partial solar eclipse.

But witnessing a solar eclipse from space is a privilege affrded to even fewer people.

NASA has come to aid of those who can't become an astronaut overnight in order to see an eclipse from space.

In its Instagram post, NASA has posted an image taken from space during the recent total eclipse which was visible only from Antarctica.

"Have you ever seen a total solar eclipse? How about seeing a total solar eclipse FROM SPACE?" asks NASA at the outset. The image shows the familiar blue orb of our planet. But what's different than usual is a black spot right over Antarctica in the south. That is Moon's shadow as it passes between the Sun and Earth, therby treating the regions under that shadow to a beautiful solar eclipse.

"Our robotic and human explorers are here to help. On Dec. 4, 2021, the Deep Space Climate Observatory (DSCOVR) spacecraft captured the Moon's shadow as it passed over Antarctica, home to penguins and a handful of scientists. Shaped like a cone extending into space, the shadow has a circular cross-section most easily seen during a solar eclipse. People in parts of Namibia, South Africa, New Zealand, and the Falkland Islands were treated to a partial eclipse," says NASA in Instagram post.

Check it out below

As it can be seen. Netizens have loved the pic and it has been 'liked' by nearly a million people.