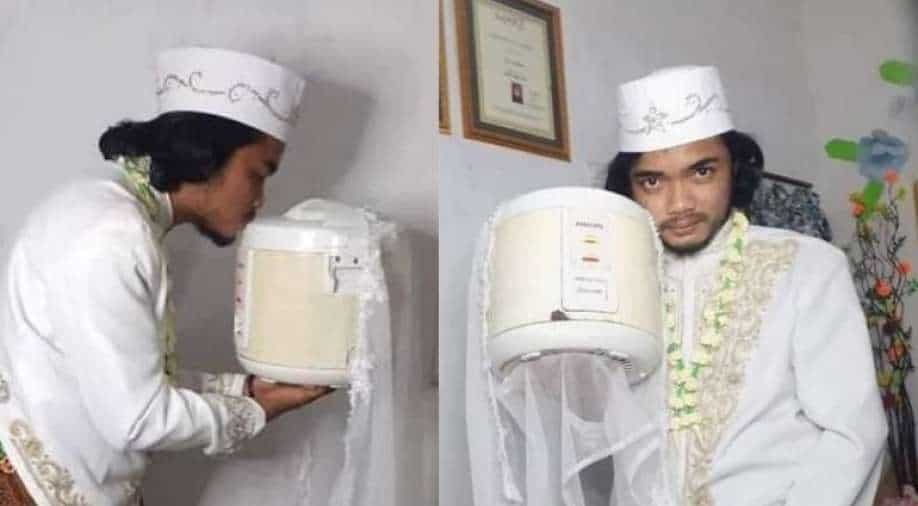 Khoirul Anam is a well-known Indonesian celebrity who performs bizarre acts for the amusement of his fans.  Photograph:(Facebook)
Follow Us

This may seem unbelievable, but an Indonesian guy named Khoirul Anam rose to the top of the trends list this week by marrying his rice cooker. Khoirul uploaded photos from his wedding with the rice cooker on Facebook, and no prizes for guessing that the image went viral.

On social media platforms, images of an Indonesian guy marrying his beloved rice cooker have gone viral.The groom is clothed in white wedding garb, but the bride is only wearing a bridal veil—she's a rice cooker, after all.

The bride and groom are seen posing together in the photographs.In one photo, Anam is seen signing the wedding paperwork, completing the legal requirements for the ceremony.He is seen kissing his bride in another photo.

As weird as it may sound, the tale only got stranger when Anam 'divorced' the kitchen equipment four days later, claiming it could only cook rice.

The divorce was publicised on Facebook by the Indonesian guy.

Of course, the wedding and subsequent divorce were all staged for the sake of amusement on social media.

According to local news sources, Anam is a well-known Indonesian celebrity who performs bizarre acts for the amusement of his fans.

His 'wedding' to the rice cooker caused quite a commotion, so it appears that he was successful in his goal of viral social media stardom.