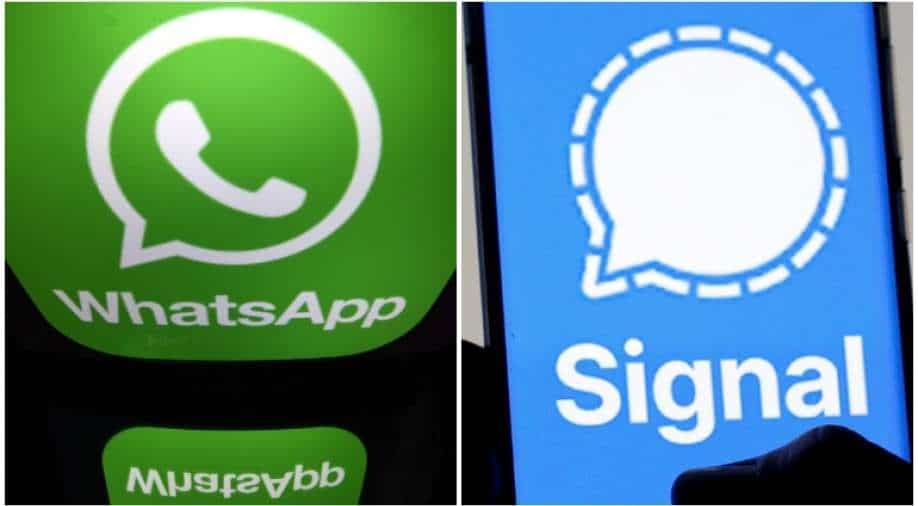 WhatsApp had earlier asked users to accept the changes and declared that the app will be unintstalled on February 8 if a user doesn't take action on policy changes Photograph:( WION Web Team )

There was a massive spike in downloads of Signal, Telegram over privacy concerns surrounding WhatsApp

WhatsApp delays privacy policy update: WhatsApp on Friday said that it was delaying its data-sharing change as the rush to rival messaging apps seriously appeared to dent its near-monopoly in several global markets. On the same day, Signal app faced technical difficulties. A message on the app's homepage said that the developers were "working very hard to restore service as quickly as possible". Signal and Telegram have massively benefitted from users' search for a secure app in light of privacy concerns surrounding WhatsApp in accordance with its new policy. WhatsApp had earlier asked users to accept the changes and declared that the app will be unintstalled on February 8 if a user doesn't take action on policy changes.

"We're now moving back the date on which people will be asked to review and accept the terms," WhatsApp said in a blog post.

The platform said it would instead "go to people gradually to review the policy at their own pace before new business options are available on May 15."

There was a massive spike in downloads of Signal and Telegram ever since WhatsApp privacy concerns made users across the globe worried. Signal saw more than 100,000 downloads while Telegram was downloaded 2.2 million times in just two days last week, according to data analytics firm Sensor Tower

New Installs of WhatsApp fell by 11 per cent in the first week of 2021 compared to the previous week.

The update concerns how merchants using WhatsApp to chat with customers can share data with Facebook, which could use the information for targeted ads, according to the social network.

"We can't see your private messages or hear your calls, and neither can Facebook," WhatsApp said in an earlier blog post.

"We don't keep logs of who everyone is messaging or calling. We can't see your shared location and neither can Facebook."

Location data along with message contents is encrypted end-to-end, according to WhatsApp.

"We're giving businesses the option to use secure hosting services from Facebook to manage WhatsApp chats with their customers, answer questions, and send helpful information like purchase receipts," WhatsApp said in a post.