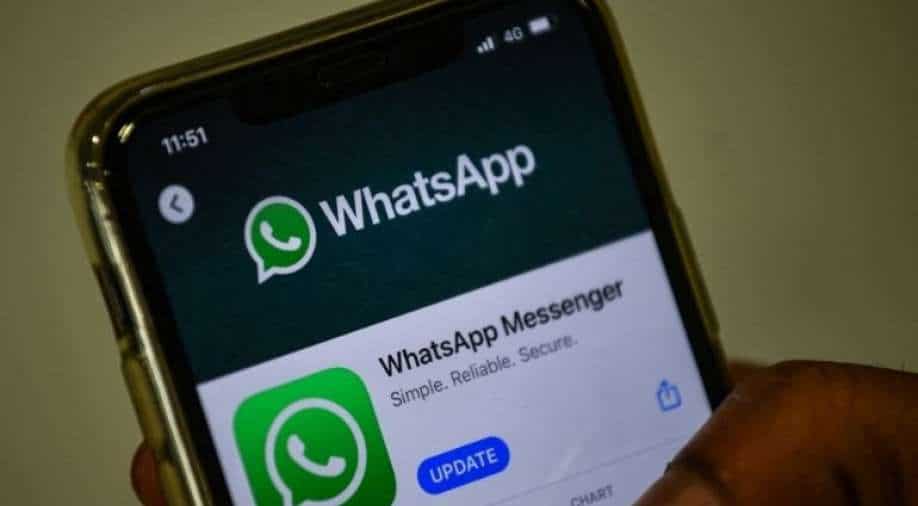 The WhatsApp messaging application is seen on a phone screen Photograph:(AFP)
Follow Us

It comes after a German regulator on Tuesday slapped a three-month ban on Facebook collecting user data from WhatsApp accounts and referred the case to an EU watchdog, citing concerns about election integrity

Facebook-owned messaging colossus WhatsApp retreated again from its plan to force users to accept new terms which critics said could expand data collection from its two billion users around the world.

It comes after a German regulator on Tuesday slapped a three-month ban on Facebook collecting user data from WhatsApp accounts and referred the case to an EU watchdog, citing concerns about election integrity.

WhatsApp, which was set to enforce its new data-sharing policy on May 15, following a delay in response to a user outcry -- revealed on its website that it would not immediately cut off users who don't accept the new terms, although it would send reminders to those who don't opt-in.

The update will allow additional sharing of information from WhatsApp with Facebook and its other applications such as Instagram and Messenger, such as contacts and profile data, but not the content of messages which remain encrypted.

The platform had claimed the update was chiefly aimed at merchants who use WhatsApp to chat with customers -- allowing them to share data with Facebook.

But critics feared it could open the door to broader data sharing with Facebook with potential implications for user privacy.

The Hamburg Commissioner for Data Protection and Freedom of Information sent the order to the social network, which owns the popular messaging service. Hamburg has jurisdiction because Facebook's German branch is based in the city.

The tech giant informed WhatsApp users earlier this year that they had to consent to a new data-use policy to continue using the service.

The German authority said in an emergency decision that the terms of that agreement were now null and void in Europe's top economy for three months.

It will hand the case over to the European Data Protection Board, an independent EU body that enforces rules throughout the 27-nation bloc.

The head of the German regulator, Johannes Caspar, said past Facebook data protection breaches as well as Germany's general election in September showed the "dangers" of "mass building of user profiles" that could be exploited.

"This ruling is intended to protect the rights and freedoms of the many millions of user across Germany who give their permission to the new use and privacy policy," he said.

"That includes not only the private sphere but also the possibility of using profiles to influence voter choices and manipulate democratic decisions."

Caspar noted that with nearly 60 million users in Germany, WhatsApp was "by far" the country's most popular social media app.

A WhatsApp spokesman said the update would not allow additional passing of user information from the service to Facebook's other applications.

WhatsApp said the German order "is based on a fundamental misunderstanding of the purpose and effect of WhatsApp's update and therefore has no legitimate basis".

The update actually "provides further transparency about how we collect and use data", said the spokesman.

As the Hamburg authority's "claims are wrong, the order will not impact the continued roll-out of the update", he added.

The regulatory action has opened a new front in Germany over Facebook's privacy policies, with its national antitrust regulator waging a legal battle over data practices it says amount to an abuse of market dominance.

Since 2018, online privacy has been subject to a European Union rulebook, called the General Data Protection Regulation (GDPR). Under the GDPR, Ireland leads oversight of Facebook because the company's European headquarters is there.