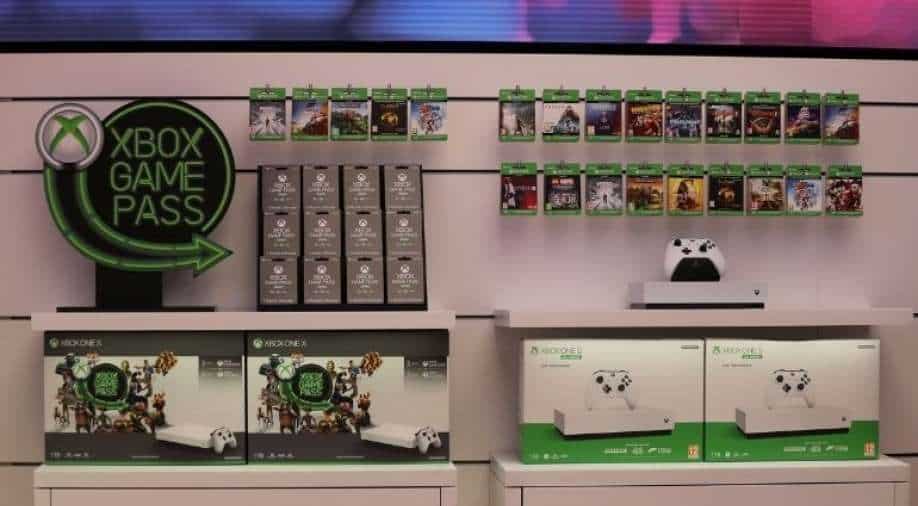 Xbox gaming equipment sits on a display shelf at Microsoft's new Oxford Circus store ahead of its opening in London, Britain Photograph:( Reuters )

The Xbox maker showed off 30 new games coming to its console, which in November will celebrate two decades on the market

The company said it would launch new games on Game Pass every month through the end of the year, including titles such as PC strategy series "Age of Empires IV" and racing game "Forza Horizon 5."

The Xbox maker showed off 30 new games coming to its console, which in November will celebrate two decades on the market.

"Our team strives to make Xbox a place where you'll find the greatest games, the most dedicated developers, and the most passionate community," unit chief Phil Spencer said during a streamed event on the second day of a virtual Electronic Entertainment Expo (E3).

Microsoft revealed a coming take of beloved "Halo", along with new creations such as science-fiction action title "Starfield" and a vampire-battling adventure called "Redfall" from Bethesda Softworks.

Microsoft recently-acquired Bethesda Softworks, the maker of hits including "Fallout" and "Elder Scrolls."

As trailers depicted tense battles and the games' rich graphics, Microsoft stressed that all but a few would be available for play at its subscription Xbox Game Pass service.

The company also highlighted titles that will be exclusive to Xbox, which competes with rival consoles Sony PlayStation and Nintendo Switch.

Award-winning "Hades" from San Francisco-based Supergiant is coming to Xbox as well as PlayStation, the independent studio said Sunday.

"Hades" has so far only been available for play on personal computers and Switch.

"Hades", which snagged five honors this year at Britain's prestigious BAFTA Games Awards, is a "dungeon crawler" that challenges players to fight their way through the underworld.

The line-up of new titles comes as Microsoft works on software and a plug-in device to let people play Xbox video games on internet-linked televisions without need of consoles.

"As a company, Microsoft is all-in on gaming," chief executive Satya Nadella said in introducing the plan last week.

Microsoft has been playing on the strength of its Xbox unit as it vies with Luna and Stadia cloud gaming services run, respectively, by Amazon and Google.

In coming weeks, cloud gaming with Xbox Game Pass Ultimate subscriptions will be possible through internet browsers Chrome, Edge and Safari, according to Microsoft.

Many are expected to tune in on the closing day of E3 on Tuesday for a Nintendo streamed event at which it may reveal a new version of its coveted Switch consoles along with showing off new games.

Microsoft has also been developing its cloud gaming service to attract casual gamers and its own streaming devices.

Game Pass has hundreds of games playable on Xbox consoles, Android devices and PCs with a $9.99 monthly fee.

"What makes us different from a service like Netflix is that we give players both options, a subscription package and also a full retail store," said Phil Spencer, head of Xbox.