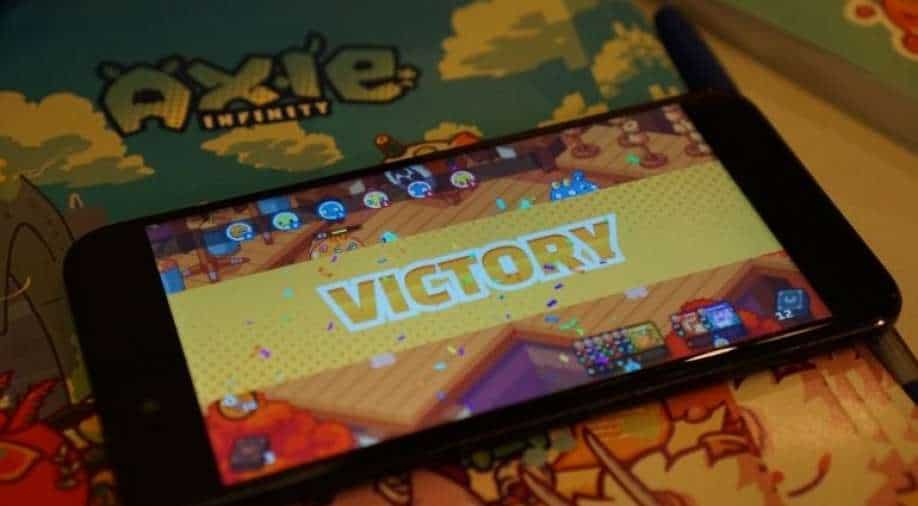 In this picture, a person can be seen playing Axie Infinity on a mobile phone in Philippines Photograph:( AFP )

Under the financial model of P2E (play to earn), Axie Infinity became the biggest winner in the field of blockchain games in the last few months

Fears of scam have surged as Axie Infinity craze has exploded in Philippines. Detractors warn the game is a "house of cards", some likening it to a fraud scheme driven by hype and speculation.

Under the financial model of P2E (play to earn), Axie Infinity became the biggest winner in the field of blockchain games in the last few months.

Also see | Metaverse, electric cars, brain tech: Take a look at how the future of technology will look like

About 35 percent of Axie Infinity traffic, and the biggest share of its 2.5 million daily active users, comes from the Philippines, where high proficiency in English, strong gaming culture and widespread smartphone usage have fuelled its popularity, Sky Mavis said.

In Axie Infinity, players participate in battles using colourful blob-like Axies, and are mainly rewarded "Smooth Love Potion" (SLPs) that can be exchanged for cryptocurrency or cash -- or invested back into the game's virtual world Lunacia.

An Axie is an NFT -- a unique, non-fungible token, with a particular set of abilities and characteristics. Like NFT pieces of art, they are stored on the blockchain -- a digital ledger that cannot be changed.

Axies can be bought, sold or rented to other players. Owners can also breed them to create new Axies that provide more value.

At the peak of the game's growth last year, a starter team of Axies could cost hundreds of dollars, far beyond the reach of aspiring players in poorer countries. The cheapest Axies cost $37 each, putting the cost of a basic team at $111.

However, players who spend more get better Axies, giving them a better chance of winning battles to earn SLPs and -- from some activities -- the game's other crypto token AXS.

Those with the capital to assemble more lucrative Axie teams have set up guilds and "scholarships" -- profit-sharing systems where players are charged a percentage of their earnings. The owners' take can reportedly go as high as 30 percent.

Its fans and creators say it is a revolutionary step towards the future of the internet. As the number of daily active players skyrocketed in 2021, the price of Axies and SLPs also soared, raising questions about the game's sustainability.

The investors in the market sounded their alarm when Axie Infinity announced that it would transfer the main network from Ethereum to its own sidechain named Ronin. The transfer of its main network would lead to absolute control of the team over the data in the chain, making the whole system more and more centralised, which would be against the nature of the blockchain to be decentralised.

Sky Mavis earns revenue from the game mainly through breeding and marketplace fees, and Axie Infinity has generated more than $1.2 billion in revenue. It has also attracted deep-pocketed backers, including US billionaire Mark Cuban.

But some gaming industry analysts say its business model is unsustainable, pointing to the need for new players to keep money coming in.

Jonathan Teplitsky of blockchain firm Horizen Labs warned most play-to-earn games were a "house of cards", fuelled by "hype and price speculation".