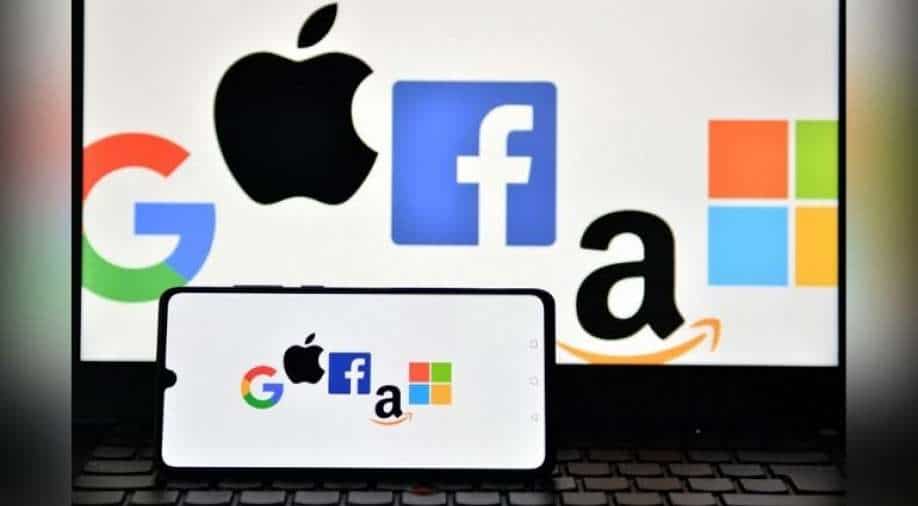 An illustration picture shows the logos of Google, Apple, Facebook, Amazon and Microsoft displayed on a mobile phone and a laptop screen Photograph:( AFP )

There has been vociferous opposition to the bills from the US Chamber of Commerce, Amazon, Apple Inc, Facebook Inc, and Alphabet Inc's Google

The House of Representatives Judiciary Committee approved five antitrust bills, three of them aimed at Big Tech, and will take up the last and most aggressive proposed legislation on Thursday, a bill that could require platforms to sell off lines of business.

In a marathon session that adjourned in the early morning hours, House Judiciary Committee members approved five of six bills that take aim at the business practices of Google, Apple, Amazon, and Facebook.

One of the measures would ban online platforms from favoring their own products and services -- responding to complaints that dominant tech firms discriminate against, and crush rivals.

In a session marked by numerous attempts to amend or water down the legislation, the committee also approved an "interoperability" requirement for platforms that would make it easier for users to switch services while keeping their data, and a separate bill banning takeovers of rivals by large tech firms.

When the committee resumes work, it will take up what some call the "break 'em up" bill. This would require a platform, again like Amazon, to sell any business that competes with other businesses using its platform.

There has been vociferous opposition to that bill and others, including from the US Chamber of Commerce, Amazon, Apple Inc, Facebook Inc, and Alphabet Inc's Google.

Judiciary Committee chairman Jerry Nadler said the package of bills is aimed at "a small set of online platforms (which) have become gatekeepers for much of the digital marketplace" and argued that "in many cases, businesses and consumers no longer have meaningful alternatives online."

The bills head to the full House of Representatives where a contentious debate is expected, amid fierce opposition from the tech sector and allies. Any bills would need passage of both the House and Senate and the president's signature.

The legislation would restrict how online platforms operate, and potentially set the stage for a breakup by limiting their ability to offer services on the marketplaces they run.

Republican Representative Darrell Issa noted that the committee was considering "radical" reforms worthy of weeks of hearings rather than one marathon session.

"I believe many of these bills are going to die in the Senate if they ever get out of the House," Issa said.

Clash points included whether it is right to target laws at four big tech companies and whether government agencies will hobble them instead of letting them adapt to the competition.

Republican Representative Ken Buck, a supporter of the overhaul, said the legislation "represents a scalpel, not a chainsaw, to deal with the most important aspects of antitrust reform," in dealing with "these monopolists (who) routinely use their gatekeeper power to crush competitors, harm innovation and destroy the free market."

"These bills don't fix that problem --  they make it worse," Jordan said. "They don't break up Big Tech. They don't stop censorship."

Steve Chabot, another Republican, called the initiative "an effort for big government to take over Big Tech."

Tech firms and others warned of negative consequences for popular services people rely on, potentially forcing Apple to remove its messaging apps from the iPhone or Google to stop displaying results from YouTube or Maps.

Apple released a report arguing that one likely impact -- opening up the iPhone to apps from outside platforms -- could create security and privacy risks for users.

"It will be much harder for these third-party sellers to create awareness for their business," Huseman said.

"Removing the selection of these sellers from Amazon's store would also create less price competition for products, and likely end up increasing prices for consumers. The committee is moving unnecessarily fast in pushing these bills forward."