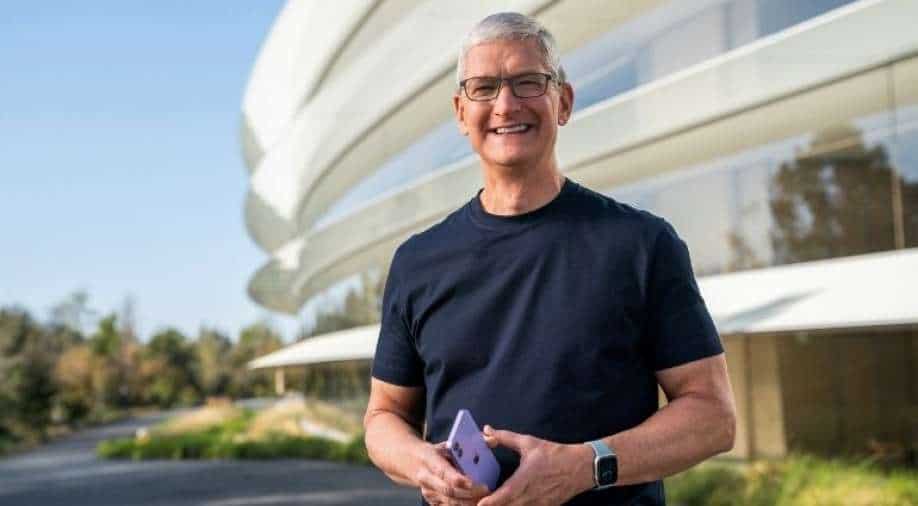 Apple CEO Tim Cook holds an iPhone 12 in a new purple finish, in this still image from the keynote video of a special event at Apple Park in Cupertino, California, US released April 20, 2021 Photograph:( Reuters )

Apple Inc announced a line of slim iMac computers and iPads with higher-quality video that use its own processors, as it speeds its migration away from Intel and caters to a work-from-home world.

The new $30 AirTags, tiny devices that can be attached to items such as keys and wallets to locate them when they are lost, were applauded by analysts as a likely hot-seller that would also keep the company's more than 1 billion customers locked into its products.

A new iPad Pro tablet, featuring the same Apple-designed processor that powers the company's more recent Mac computers, has keyboard and trackpad options that help make it a full-blown alternative to traditional laptops and desktops.

And a refresh of the Mac desktop line boasts seven color options, harkening back to the famous candy-colored Macs that helped Steve Jobs revive the company in the 1990s.

The announcements show how the iPhone maker is accelerating the expansion of its product portfolio and working to keep customers committed to its family of devices even as government scrutiny of the power and reach of major technology firms intensifies.

The wide variety of announcements largely had been telegraphed before the presentation, which had no major surprises. Shares of Apple were down 1.3 per cent, slightly more than the 1 per cent drop in the Nasdaq index.

The new iMacs, which start at $1,299, feature a higher quality front-facing camera and microphone, responding to complaints from consumers during the pandemic that the computer's cameras had not kept pace with iPhones and iPads during an era of pervasive video calls.

The thinner iMac computers will use an Apple-designed central processor unit and come in seven colors, including purple and green. With a 24-inch (61-cm) display, the iMacs are flat and 11.5 millimeters thick.

The new iPad Pros, starting at $799, use the same M1 chip as Apple's other computers, rather than the beefed-up version of iPhone chips found in previous models. The tablets also have additional ports for connecting monitors and 5G connectivity, while featuring a higher-quality display than the company's laptops.

The expansion of Apple's M1 chips into the iPad Pro continues a migration away from longtime partner Intel. Apple in November announced three new computers would use an in-house processor.

The company also announced podcast subscription services that will compete with rival Spotify and an updated Apple TV set top box with better color output and a faster processor chip.

Apple shares have risen nearly 95 per cent over the past year, faster than the 63 per cent rise in the Nasdaq Composite Index, thanks to a record $274.5 billion in sales for fiscal 2020 as consumers stocked up on electronics during the pandemic.