'You are giving me a heart attack': Umpire Erasmus' banter with Indian players caught on stump mic 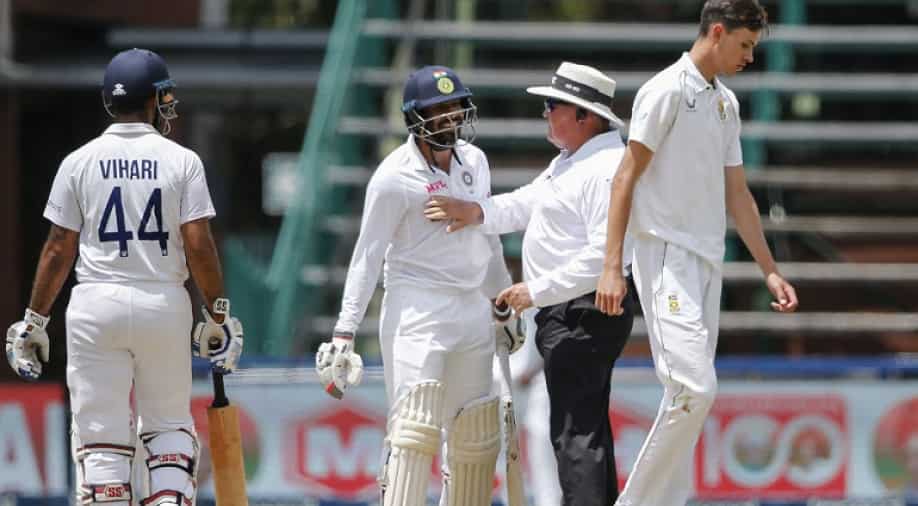 Umpire Erasmus' comments were caught on the stump mic during Day 3's play of the 2nd Test. Photograph:( AFP )

On-field umpire Marais Erasmus was caught on the stump mic enjoying some fun banter with the Indian players on Day 3 of the second Test between India and South Africa in Johannesburg.

South Africa defeated India by seven wickets in the second Test of the ongoing three-match series at The Wanderers Stadium in Johannesburg on Thursday to level the series 1-1. It was a thrilling encounter between the two sides with both teams giving their all on the pitch.

The Test match also saw a number of heated exchanges and clashes between the players from the two sides as plenty of drama was on offer throughout the course of the game.

While the on-field sledges and chatter between the players garnered a lot of attention on social media, on-field umpire Marais Erasmus was also spotted enjoying banter on the field with the Indian players. The incident happened during Day 3 when South Africa's second innings was underway in Johannesburg.

During the tenth over of South Africa's innings, Indian pacer Shardul Thakur burst into two big appeals before finally managing to dismiss Aiden Markram on the last ball of the over. As action intensified on the pitch, Erasmus could also feel the heat and was heard poking fun at the Indian players.

“You guys are giving me a bloody heart attack after every over," Erasmus was heard saying on the stump mic after the end of Thakur's over where he got rid of Markram. The video of the incident soon went viral on social media.

Earlier during the day's play, Indian wicket-keeper batter Rishabh Pant had a heated argument with Rassie van der Dussen over his controversial catch of the South Africa batter on Day 2 of the Test match. Indian pacer Jasprit Bumrah was also seen getting involved in a heated exchange with South Africa's Marco Jansen.

Captain Dean Elgar led from the front with a brilliant knock of 96 runs as he helped South Africa chase down the target of 240 runs in their second innings with seven wickets to spare. With the win, South Africa levelled the three-match series 1-1.